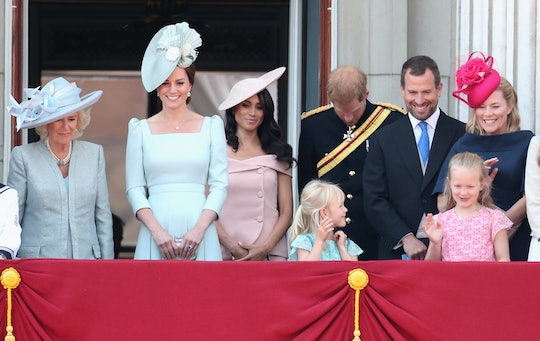 Meghan Markle Has Officially Joined The Royal Foundation, & Here's What She'll Be Doing

Meghan Markle has only been an official royal for a few weeks, and she is already giving back to her new community in so many ways. Most recently, she was appointed a patron of The Royal Foundation, of which her husband and new in-laws are also patrons. That being said, what exactly is The Royal Foundation?

We are delighted to welcome Meghan to the Foundation. She has always shown great drive and compassion for making a difference in the world, and we are excited to embark on important projects together.

Meghan has always had an affinity for charity work, so it's no surprise that The Royal Foundation is welcoming her with open arms. As a child, her parents encouraged her to give back in so many ways — something she opened up about in a 2016 essay for Elle. She wrote:

My parents came from little so they made a choice to give a lot: buying turkeys for homeless shelters at Thanksgiving, delivering meals to people in hospices, giving spare change to those asking for it. It's what I grew up seeing, so it's what I grew up being: a young adult with a social consciousness to do what I could and speak up when I knew something was wrong.

And in a 2015 speech at the U.N. Women's conference, Meghan shared the story of the first big difference she made in the world, back when she was 11 years old, Glamour reported. At school, her class watched a dish soap commercial featuring the line "Women all over America are fighting greasy pots and pans."

"I remember feeling shocked and angry and also just feeling so hurt," Meghan recalled in her speech. "It just wasn't right, and something needed to be done." So, she wrote letters: to Procter & Gamble (the company behind the commercial), First Lady Hillary Clinton, lawyer Gloria Allred, and Nick News host Linda Ellerbee. Her story made it to the children's news program, and Procter & Gamble listened, eventually changing the line in the commercial to be "People all over America are fighting greasy pots and pans."

Meghan Markle has clearly always loved giving back, and it will be so exciting to see how she continues to do so as the Duchess of Sussex and a Principal Patron of The Royal Foundation.