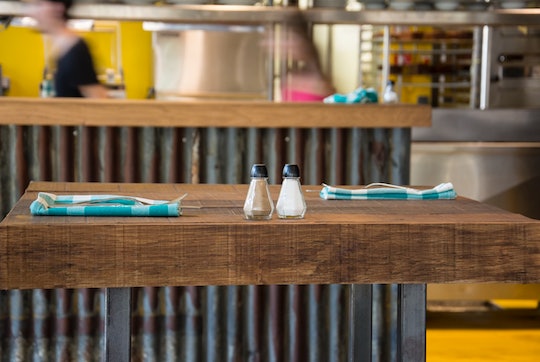 The Salt & Ice Challenge Has Made A Dangerous Comeback

What is it about kids that makes them so immune to pain? From jumping out trees and breaking bones to partaking in silly (yet harmful) YouTube challenges, it seems as if kids will always find a way to test their limits, even when all signs point to it being a bad idea. Kids' curiosity has been around since the beginning of time — but parents might want to pay extra attention these days. With recent headlines warning parents of its dangers, the salt and ice challenge is the latest troubling trend to hit schools across the country; And as innocent as it sounds, parents should know that it entails something much more dangerous than its name might suggest.

It's safe to say that most parents associate salt and ice with making homemade ice cream in a plastic bag (I can't be the only one who did this as a child) or with their neighborhood roads and winter weather (because they have to get to work somehow). But children aren't delving into making a fun treat or helping clear off their driveway with this salt and ice challenge. Instead, according to PopSugar, they're using it as a way to test their limits and show off to friends, putting salt on their arms, and holding ice on top, in order to see "who can stand the pain the longest." After partaking in the challenge, kids are also sharing photos and videos of their results on social media — and the results are not pretty.

Ice and salt, when placed together on the skin, can cause a scary (and scarring) result. The reaction of ice and salt together causes something "like frostbite," Dr. Brian Wagers a pediatric physician at Riley Hospital for Children at IU Health, told AOL. When the reaction happens, according to Wagers, it causes a third-degree burn — which is bad enough. But those burns could also lead to infection, which then could cause the need for further medical attention. In the United Kingdom, one child was admitted to the hospital with nerve damage caused by the challenge, according to The Huffington Post.

It's important to note that this "challenge" has been around for a while — popular YouTube creator GloZell Green's take on the challenge has amassed over 15 million views on YouTube and was published 2012. Today also published a story about the salt and ice challenge in 2012 (and recently had to repost it to their website). But in the past five years since then, it seems kids haven't learned their lesson and still continue to take on the challenge, in spite of knowing its dangerous results.

With the resurgence of the challenge so many years later, there is no doubt that the salt and ice challenge will return again eventually. It's best that parents know about this painful combination now, before they see the results of it shared on their kid's social media accounts — or worse, before someone ends up in the hospital.