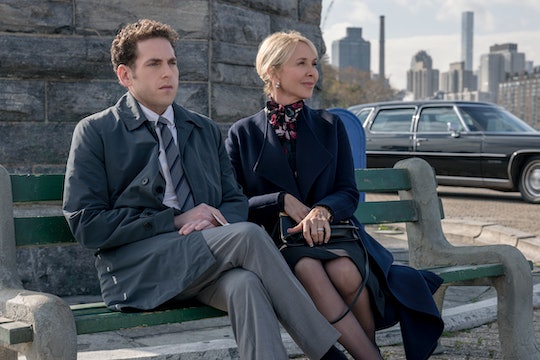 Imagine a life void of pain, mental illness, or heartache — without complications or side effects. The new mind-meld Netflix series, Maniac, explores this idea with a pharmaceutical twist. The 10-episode dark comedy starring Jonah Hill and Emma Stone takes a long, hard look at what it would take to actually cure the brain. Based on the Norwegian TV series of the same name, director Cary Fukunga dives deep into the "retro-futurist world" where reality blurs with the imaginary. So what is the science behind Maniac that promises to leave viewers on the edge of their seats?

The concept of Maniac, as Netflix says on their websites description, revolves around a "mind-bending pharmaceutical trial" through a sequence of magical pills. The promise? That the mind can be fixed. I'm no doctor but it sounds easy enough. The highly anticipated (albeit ambitious) series focuses on Stone's emotionally traumatized character, Annie Landsberg and Hill's character, a diagnosed Schizophrenic, Owen Millgrim. The pair connect in the trial facility. Along with a few others who have no idea what's in store, Annie and Owen agree to three drugs in three days to "fix" their minds. According to the New York Times, Dr. James K. Mantleray (Justin Theroux), runs on the notion that his medicine can do "the work of decades in three days." Theroux plays the inventor who vows "pain can be destroyed" and "the mind can be solved."

Maniac asks audiences: if a proprietary pill can cure all trauma, mental illness, heartache, and pain (and fast), would you take it? The show explores the temptation and the consequences of such a drug treatment, (which does not actually exist in real life). If it sounds like Maniac is a list of reasons not to take medication at all, creator and novelist, Patrick Somerville, tells Independent UK not to confuse the show's premise with our actual reality. "Pills save people's lives," he says. The difference is, as Somerville explains, "in the way Dr. Mantleray says it takes three days, there are no side effects, and it’s easy. Nothing that is going to be effective in making people feel better is going to be easy." Cue dramatic music here.

Instead of doing the things Dr. M says they'll do, the pills incite "multi-reality brain magic sh*t." Stone and Hill then have "reflections" that lie between reality and dreams. The formula forces them to relive the worst days of their lives. As if that's not "fun" enough, they're made to go through the events first as themselves, then again as other characters all while the technology develops its own feelings and thought patterns. This is an obvious setup for good things, right? No frickin' way, friends.

You probably see what's coming. The trial goes awry and things don't go as planned. That unsettled, fever dream feeling may be the work of Fukunga, but it's all part of that master plan. The series has already been compared to Black Mirror, Inception, and Eternal Sunshine of the Spotless Mind for all its genre-bending quirks. This multi-layered dark comedy may leave you wondering what you'd do in the same scenario. If the science behind Maniac were as tangible in the real world as it is on Netflix, would you remove the bad parts of your psyche in a speedier process if given the chance?

The original 2014 Norwegian source material, according to Indie Wire, tells a similar story from the perspective of "two back-and-forth narratives," with one dealing with a patient in a mental asylum and another set in the patient’s internal fantasy world." It's hard to tell if this version will follow the same recipe. Regardless, the star-studded cast — which includes Sally Field and Jamima Kirke, among others — is enough to give it a try.

As for the magical, cure-all pills themselves, it remains to be seen if Annie or Owen find the healing they're in search of. All of this to feel a little less emotionally unwell? Sign me up (just don't tell the AI).