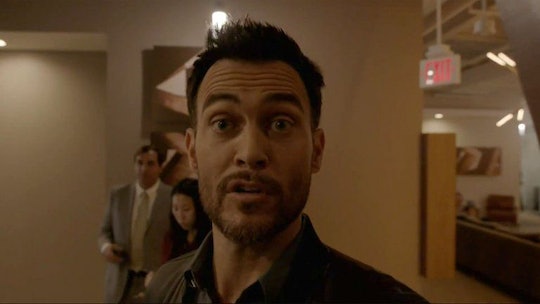 What Is The Second Half Of 'AHS: Roanoke' About? We're Going "Behind The Scenes"

This season of American Horror Story has been all about subverting expectations. From the new documentary-style format to the way two actors played "real" and "dramatic re-enactment" versions of several roles, hardly anything about Roanoke has gone as expected. But the biggest shock of all came at the end of the latest episode, "Chapter 5," when the Miller family escaped the Butcher's wrath and brought their "Roanoke nightmare" to an end – except for the fact that there are still five episodes left in this season. So what is the second half of American Horror Story: Roanoke about, then?

While we still don't have all of the details, Ryan Murphy's recent interview with E! shed a lot of light on how the final five episodes of the 10-part season will play out. Specifically, he confirmed one long-standing fan theory – that, for the first time in the show's history, members of the core cast will start playing totally different characters midway through the season.

This includes Sarah Paulson, Evan Peters, and Kathy Bates – all of whom, obviously, portrayed characters in the "My Roanoke Nightmare" dramatic re-enactment sequences (Shelby Miller, Edward Philippe Mott, and the Butcher, respectively). Murphy also announced that Taissa Farmiga and Finn Wittrock would be returning in new roles for the season's second half, calling Wittrock's role "his most f--ked-up character of all time."

Murphy has been talking about the big Episode 6 twist since very early on in the season. While he's still remaining vague about the details – like who the new characters are going to be and what this all has to do with the overall Roanoke plot anyway – there's plenty in what the showrunner has said that backs up one AHS: Roanoke theory that's been floating around. Namely, this twist info could confirm that the actors swapping roles might be playing themselves in the back half of the season.

If you think about it, this theory (first posted on the American Horror Story subreddit in late September) makes a ton of sense. If we're set to see all (or most) of the dramatic re-enactment actors in brand-new roles – and we're going "behind the scenes" of "My Roanoke Nightmare," as the Episode 6 promo suggests – it stands to reason that the new characters we'll be seeing will be the actors themselves (sorta).

In other words, Evan Peters could be playing a version of Evan Peters, Sarah Paulson a version of herself, etc. The fact that Kristin Dos Santos is appearing in some capacity in Episode 6 also backs up the idea that we'll be seeing some version of these actors playing themselves (maybe on the "red carpet" for the "My Roanoke Nightmare" premiere, or an awards show, or something).

This could be a really fun twist (though it could also potentially verge on too-campy), and it would explain why Murphy calls Peters' appearance as a new character in Episode 6 "one of the greatest, most hilarious things Evan has ever done." Which, after seeing the powdered-wig wearing, immediate fan fave Edward Philippe Mott, is certainly saying something.

Going off of this theory, we might see the actors (playing themselves in the back half of the season) encountering the "real" versions of the ghostly characters that some of them played – the "real" Butcher, the "real" Pig Man, etc. – played by new actors. We do still need a villain (or villains) for the last five episodes, after all. This is American Horror Story – they're not going to completely abandon the horror aspect.

Regardless of whether any of our theorizing is accurate, one thing is for sure – this is gearing up to be the most outlandish season of American Horror Story in the series' history.