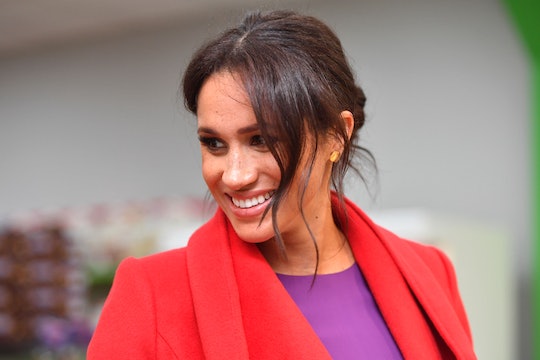 Oh, baby! Meghan Markle is sharing details about her pregnancy left and right lately. While out on the town with Prince Harry, Markle shared her due date, how she's feeling, and more with a crowd gathered there. So, what is the sex of Meghan Markle's baby? When the Duchess was asked by a royal supporter, she responded honestly. Here's what she had to say.

Markle and Prince Harry were out walking in the town of Berkenhead on Monday when they were quickly bombarded with questions about their coming royal baby. And rather than brush off their many admirers, the two happily and honestly opened up about the pregnancy. In the midst of the questioning, a young fan of the family asked Markle if she and Harry were having a girl or a boy, People reported.

9-year-old Kitty Dudley of St. Anne’s Primary School told the outlet that Markle approached her and the two had a chat. “Meghan came up to me and asked me how old I was and where I went to school," Dudley said, according to Hello! "I could see her bump and I asked if she was having a boy or a girl and she said, ‘We don’t know whether it’s a boy or girl, we are keeping it as a surprise.’"

Markle and Prince Harry aren't the only royals who prefer not to know the sex of their baby before it arrives. As you may remember, Kate Middleton and Prince William went the wait-and-see route with all three of their children. As E! News reported, it made preparing for their coming bundles of joy a bit more difficult, but they were excited for the surprise. "William and Kate don't know the sex of the baby, so they're rather looking forward to finding out," a source told E! before Prince Louis, the couple's youngest, was born. "It's very difficult to be totally prepared when you don't know if it's going to be a boy or a girl."

But just because Markle and Prince Harry don't know the sex of their baby, that doesn't mean that they don't care. In October when the parents-to-be were touring around Australia, Harry told a crowd that he was was hoping for a little girl, as People reported. When a fan said that she wanted it to be a girl, Harry was quick to respond, "So do I!"

The baby's sex isn't all that Markle discussed on Monday. Another little girl, Megan Redford, 7, raised the question of baby names with the mom-to-be. According to Daily Mail U.K., she said:

She asked me if I was called Meg or Meghan because she said her friends call her Meg and mine do as well. I asked her whether she would call her baby Amy if she has a girl and she said, ‘That’s a really pretty name, I like it, we’ll have to think about it.’

And finally, Markle revealed a more specific due date to the crowd on Monday. Carla Gandy, who was in the crowd gathered in Hamilton Square, told People that Markle is due in about three months. “We asked her how her pregnancy was going and she said she was six months and she tapped her tummy,” she said. Markle told the crowd that she is due in late April. “She said her pregnancy had gone so quickly,” another person in the crowd said. “I asked her how she was coping on those high heels. She said, ‘One day at a time!’"

Markle and Prince Harry still have some time to wait until their baby arrives, but fortunately Markle seems to be in good health. And until the big day, fans have lots to be excited about.