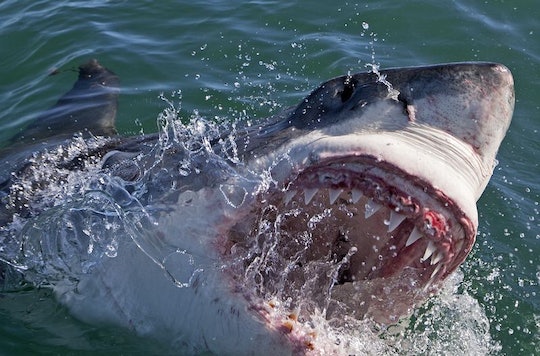 The Shark Week Box Could Make Your Marathon More Fun

There are countless ways to enjoy Shark Week. You can simply sit back and watch, blazing through all eight days of shark-related specials. But if you'd like some additional material to enhance the experience, then you might be interested in trying the Shark Week box. But wait — what is the Shark Week box? And should you order one?

According to the official website, the Shark Week box allows superfans to "dive deeper into Shark Week with this limited edition box full of exclusive Shark Week apparel, goodies, and collectibles." The site also provides a rundown of all the things you can expect to find inside the box, which will cost you a whopping $59.99 in total. For that price point, you'll receive a Shark Week-branded mug and t-shirt, as well a shark figurine, bingo cards, refrigerator magnets, some very special sand, and Swedish Fish. That gives you an outfit to watch in and snacks to munch on while you watch, as well as some fun and games to keep you occupied during the commercials. It has everything a lover of Shark Week could possibly need.

Quantities are reportedly limited, so if you want to order one, you should probably jump on it. But is it worth it?

To determine that, you'll probably need to know a little bit more about the objects inside the box. Though many of them may seem insignificant at first glance (really, sand?), they're all unique in their own ways and that might make the box as a whole much more appealing to you. The exclusive Shark Week mug has an adorable design featuring different kinds of sharks, but it also comes with a twist: it's a heat-changing mug, which means it's a basic black until you fill it with your hot beverage of choice and suddenly the sharks appear. Playing ominous Jaws music while you do this is best left to your discretion.

The figurines are Shark Week bobbleheads which are, according to the website, "hand-crafted and hand-painted in stunning detail." They depict a shark with wide open jaws emerging from the water with a little seal for company. You can choose the seal's fate yourself by placing it in the shark's mouth or allowing it to swim happily beside its would-be devourer, not yet an unwitting dinner. Though most of the bobbleheads are realistically painted, a lucky 300 customers will be the random recipients of a gold-painted shark and seal. It would be like your own personal shark Oscar.

Then there are the more interactive things in the box. Shark Week bingo cards let you play as you watch, marking off each square as the item within it appears onscreen. Two sets of magnets let you either create shark-themed poetry on your fridge or dress up a shark in a variety of outfits, from top hats to hula skirts. The box also contains kinetic sand, which you can shape into whatever you like without worrying about it drying out.

Lastly, there's the self-explanatory Swedish Fish and limited edition t-shirt. The shirt could be the best way to commemorate Shark Week 2018 because its design is specific to this year. Per the site, its "repeating wave pattern features a shiver of sharks lurking just below the surface and a very worried seal printed in white on an ultra-soft heathered gray shirt." Even the box itself is part of the fun: with a few adjustments, it transforms into a shark straight out of Picasso's Cubism period.

Supposedly a $100 value, you are getting a little bit of a discount at the purchase price. But let's be real — and no disrespect to Shark Week — there's not necessarily anything here that you couldn't get somewhere else. Magnets aren't especially unique, and you could easily make bingo cards yourself. The branded merchandise is cute but you can find variations on it from other places without Shark Week's stamp.

But ultimately buying the Shark Week box is up to you. If it's your favorite week of the year, you never miss it, and you're financially able to make the purchase, then why not? It could be a fun summer treat. However, if you're a fan of seals, perhaps stay away — they don't have the best time in this box.