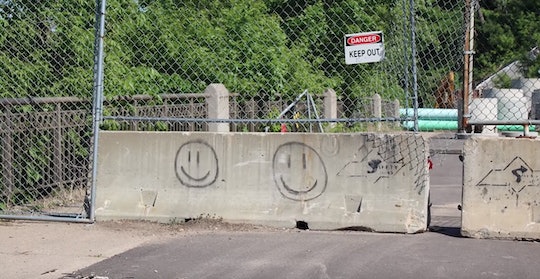 The Smiley Face Killers Theory Is Back In The Spotlight

Since the late 1990s, hundreds of college-aged men across the United States died of what were deemed accidental drownings at the time. But Oxygen’s new true crime docuseries, Smiley Face Killers: The Hunt for Justice, follows a theory that connects these drownings to a more sinister agenda. But, exactly what is the Smiley Face Killers theory?

According to Oxygen, since 1997, New York Police Department detectives Kevin Gannon and Anthony Duarte have been investigating dozens of these mysterious drownings, and over the years, they discovered that smiley faces were spray-painted near some sites where the men were drowned. They have come to believe that these deaths are actually the work of a network of serial killers they call the Smiley Face killers, who may operate and communicate which each other on the dark web.

Gannon and Duarte — both retired NYPD homicide detectives — first brought their theory to the public in 2008, when they revealed detailed evidence of their findings. "I believe these young men are being abducted by individuals in the bars, taken out, at some point held for a period of time before they're entered into the water," Gannon told CNN at the time. "This is a chance for them to have power and control over somebody else and manipulate. The fear of death is just as important as the act of death itself.” Duarte said that he believed the killers were leaving clues that to lead authorities to the murder sites, and the smiley faces were meant to be a “taunt” for investigators.

However, many local and federal authorities, including the Federal Bureau of Investigation (FBI) have stated that they don’t believe these drownings to be the work of serial killers. “The FBI has reviewed the information about the victims provided by two retired police detectives, who have dubbed these incidents the "Smiley Face Murders," and interviewed an individual who provided information to the detectives,” the FBI stated in a 2008 press release.

“To date, we have not developed any evidence to support links between these tragic deaths or any evidence substantiating the theory that these deaths are the work of a serial killer or killers. The vast majority of these instances appear to be alcohol-related drownings. The FBI will continue to work with the local police in the affected areas to provide support as requested.”

However, despite the FBI’s stance on their theory, Gannon, Duarte and many others are hoping that the docuseries convinces local law enforcement agencies to reopen these drowning cases and treat them as homicides. “It’s been a difficult road and that’s why we had to choose TV, to go to the court of public opinion,” Gannon said in an interview with The Daily Beast. “We felt like there was no other option. To me, this is one of the most dangerous domestic terrorist groups in the United States and somebody needs to pay attention to them.”

In the docuseries, many of the victims’ families express their support for the Smiley Face killer theory. Along with Gannon and Duarte, these families desperately continue to find clear answers on what happened to their loved ones.

New episodes of Smiley Face Killers: The Hunt for Justice air on Saturdays at 7 p.m. ET on Oxygen.