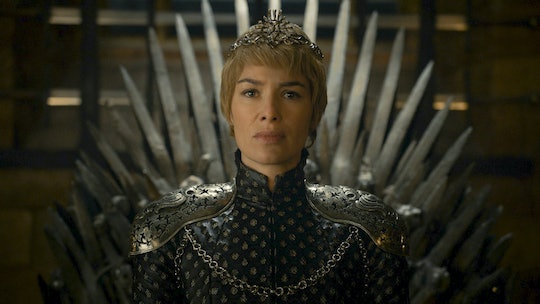 What Is The Song From The 'Game of Thrones' Finale? Here's How To Listen

One of the best surprises in the Game of Thrones Season 6 finale had nothing to do with the plot. Rather, many fans noticed the chilling, eery music that scored the opening sequence of the show, affectionately known as the wildfire barbecue. As the events of Loras' trial, Cersei's plot to fry the Sept of Baelor, and Tommen's suicide unfolded, a haunting piano piece flawlessly punctuates the rising tension and shocking deaths. So fans might still be wondering, what is the song from the Game of Thrones finale? Luckily, the piece was released as part of the Season 6 Game of Thrones soundtrack, which is now available on Spotify.

The track, called "Light of the Seven," is a 10-minute long piano, cello, and organ instrumental, with a some brief creepy choral voices thrown (throne?) in for drama. If you're going through season finale withdrawals, cue this bad boy up for insta-feels. It will take you right back to the lit (literally and figuratively) opening, which more than one outlet have compared to the baptism montage from The Godfather. Ramin Djawadi, who is the show's composer, also composed this piece, which was released the day after the finale aired to the critical praise of "straight fire." The piece's title is a reference to the Faith of the Seven, in which people are said to be blessed in "the light of the seven" gods.

The pregnant pauses in the piece were perfect accents during the opening sequence to score seemingly mundane moments — like the sparrows filing into the Sept, Loras shivering on a cell floor, Margaery looking around for Cersei, a prostitute asking Maester Pycelle for money, and The Mountain blocking Tommen from leaving his chamber — with silence. At other times, the music frantically swelled, like when Pycelle was being stabbed to death by a zillion (okay like, seven) "little birds," when Margaery tries to escape the Sept of Baelor, and when Lancel tries to blow out the candles before they set the wildfire off.

The piece also scored the "Inside the Episode" mini-doc for "The Winds of Winter," in which showrunners David Benoiff and DB Weiss seem genuinely scared of a world ruled by Cersei.