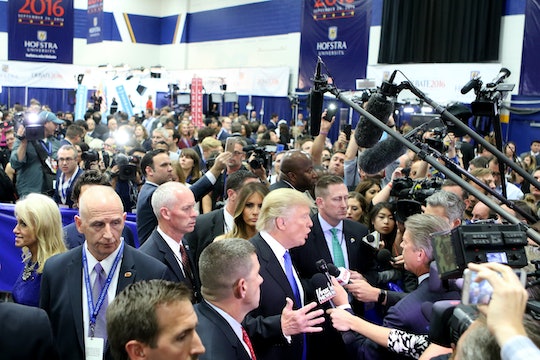 What Is The Spin Room? It's A Crowded Room Where Some Of The Best Action Happens

If you're an avid debate watcher, then you know that one of the most interesting parts of the presidential showdown actually happens once the two nominees leave the stage, in the spin room. If you're not quite as familiar with the presidential media circus, you may be wondering: um, what is the spin room? If you're thinking that it sounds like something sinister and secretive off of House of Cards, that's understandable. However, a real spin room is a lot more public, and nothing very surprising is going down in it (don't worry, though — it's still very entertaining).

After a political event — say, a presidential debate — the spin room is where journalists congregate to speak with campaign representatives and surrogates, who tend to function as cheerleaders for their nominees. For example, after one of the early GOP debates last year (man oh man, has this been a long campaign season), an NPR journalist in the spin room asked several different campaign surrogates who had won the debate that just wrapped up, and got as many different answers as the number of people he asked. This is what puts the "spin" in spin room: campaign members get to retell their version of what happened, and journalists get some sometimes weird, sometimes wacky, sometimes wonderful quotes out of the ordeal.

When it comes to presidential debates, nominees don't typically make their way into the spin room, but after the first presidential debate in September, Republican nominee Donald Trump made his way into the fray. "I’m very happy," he told reporters, according to The New York Times. "I very much enjoy the debate process." He pushed a Bustle reporter's phone away when she asked about young female voters and ignored a foreign reporter's question. "All the online polls say I was the big winner," he told outlets.

In the same spin room, Democratic candidate Hillary Clinton may not have been present, but her campaign surrogates certainly were. According to Time, campaign manager Robby Mook told reporters, "We assumed [Trump] would prepare. He did not. We assumed we would maintain his composure. He could not. He became unhinged."

Elsewhere in the frantic room full of flashing cameras, politicians, a boxing promoter, an Apprentice star, and the owner of the Dallas Mavericks all gave reporters their own version of the truth (in short, their candidate won the debate) and tried to include a few subtle (or not so subtle) digs at the opposing candidate's performance. Just a typical day in the spin room.

During the next debate, keep an eye out for a few things. Will Trump reappear in the spin room, where he seems quite comfortable? Will Clinton join him? What celebrities will be there stumping for their preferred candidate, and what stories will they tell? After all, the spin room is just another great, carnival-esque opportunity to get to know the presidential candidates — and their supporters — a little better.