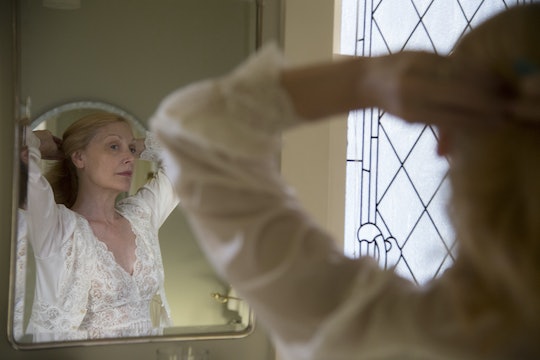 In the second episode of Sharp Objects, Camille got her first lead on the abduction and murder of Wind Gap girl Natalie Keene. Unfortunately, the information might not have come from a reliable source: there was one witness to Natalie's disappearance, but it was a very young boy who identified her attacker as the mythical Woman in White. So what is the story of the Woman in White on Sharp Objects?

Camille was instantly familiar with the figure, referring to her as a local legend in Wind Gap and even visualizing a ghostly figure in white at the edge of the trees. But she didn't dig into the story any further than that. And the book that the show is based on is similarly lacking in explanations: no one mentions the Woman in White specifically. The witness, James Capisi, tells Camille that the woman who took Natalie was "wearing a white bed dress with white hair. She was just all white, but not like a ghost."

In the novel, it doesn't seem as though anyone attributes the murder to a fictional figure like the Woman in White, though Camille does speculate that James turned the crime into something fairytale-ish in an attempt to deal with the horror. The show does the same: it would make sense for a little kid dealing with a sick mom to cope by interpreting things in a more fantastical way. But it doesn't clarify the myth of the Woman in White.

In "Dirt," Camille reminded police chief Vickery that kids in Wind Gap would "scare each other with stories about the Woman in White killin' little children." He dismissed it as town folklore, but it's clearly a significant detail not just in the murder, but in understanding Wind Gap. A child-killing ghostly woman was their Bogeyman, and now she seems to have come to life. Either someone is imitating the fictional figure, or she really is a figment of James Capisi's overactive imagination.

The Woman in White was very important to author Gillian Flynn. As she told The Hollywood Reporter, female mythology is prevalent in both the book and the show, but this is the first time it was made flesh, so to speak. Flynn had even toyed with the idea of expanding the Woman in White in the past, saying:

I've always wanted to do a Woman in White spinoff — the original Slender Man sort of idea, how that came to be, what the origin story of the Woman in White was. I actually sketched out a short story years ago when I was writing Sharp Objects. They always said, 'That story's been around for years. Don't pay attention.' I was like, 'Really?' Of course my weird little brain was like, 'It's been around for years? When did it come to be? Let's write this, too.' Because that has to be a story itself.

In Still Watching, the Sharp Objects companion podcast from Vanity Fair, Flynn explained that the Woman in White was also partially inspired by an urban legend from her childhood. Growing up in Missouri, kids talked about a monster called Momo (short for 'Missouri Monster'), which one could liken to Point Pleasant's Mothman or the fabled Bigfoot. It seems to be a common phenomenon for regional legends to take the form of unknown monsters, giving amorphous fears a physical form.

The story of the Woman in White is simple: she's the culmination of childhood terror, a mysterious creature that comes to snatch seemingly safe kids from their homes. But in Sharp Objects, she might be more noteworthy than that. She represents all the darkness hiding in plain sight in Wind Gap, only just starting to emerge.