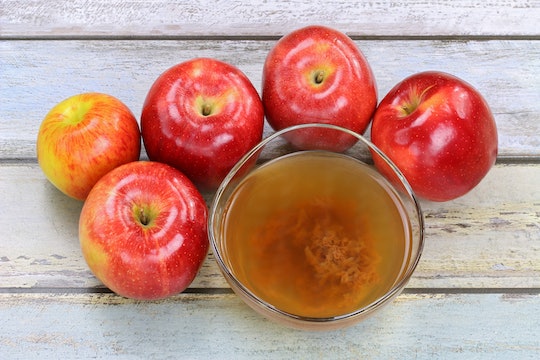 If you've been around the homeopathic crowd, you know that apple cider vinegar is hailed by many as the remedy for all that ails you. And I sure hope it is: A gallon of this extra sour liquid will set you back just a fraction of the cost of prescription medication. If the health claims are true, apple cider vinegar could be the future. And that's all well and good, but can we take a second to address the very disturbing mass of gunk floating around in there? What is the stuff at the bottom of apple cider vinegar, and why on earth don't manufacturers remove it before bottling up this miracle cure?

According to Karen Wright, Certified Nutrition Specialist at Metro Integrative Pharmacy in NYC, that unsightly mass is actually called "the mother," because of its reproductive qualities. (I'm not sure whether to be completely grossed out or utterly impressed.) You might notice that not all apple cider vinegars sold in stores have this weirdness floating around on the bottom, and you're likely tempted to grab the non-icky variety — but not so fast.

"Vinegars that have the mother are unpasteurized, unrefined, and unfiltered," Wright explains in an interview with Romper. "Although the appearance of vinegar is not as appealing when the mother is in the bottle, it has important health benefits which are not present in the clear pasteurized version. During the heating and manufacturing process, beneficial bacteria and living enzymes are stripped from the pasteurized vinegar."

Wright's assertions, though divergent from the mainstream medical wisdom we're usually exposed to, are widely held. Doctor of Natural Medicine and founder of DrAxe.com, Dr. Josh Axe, is another big fan. "The 'mother' in apple cider vinegar is a culture of beneficial bacteria involved in the creation and fermentation of vinegar. The mother is usually found in unrefined and unfiltered versions of apple cider vinegar, which can carry more benefits than the filtered varieties. It can balance stomach acid, improve insulin sensitivity, and even give your immune system a boost."

But the health benefits may not stop there. According to chiropractic physician Dr. Scott Schreiber, regular consumption of apple cider vinegar can also result in digestive support, weight loss, lower cholesterol, and blood sugar regulation. These are bold claims, but with essentially no risk factors, there's not much to lose.

Now if you really want to get technical, Wright is here for it. As one with experience in making her own vinegars from home, she is eager to explain the scientific side of the process. "When a vinegar is fermented naturally, it often forms a pellicle 'mother' on the surface from the pectin and apple residues," she tells Romper. "The pellicle is a cellulose mat formed by the bacteria. Cellulose is a polysaccharide consisting of linked glucose molecules. The pellicle can be reused to ferment other batches of vinegar quicker, though it is not necessary to make vinegar. It's important not to damage the pellicle to prevent mold development, and it takes several weeks for the pellicle to form."

Did you get all that?

To reap the touted benefits of apple cider vinegar, experts say the easiest way is to use it in dressings, sauces, and cooking. Some people find it more convenient to simply swallow a tablespoon before meals, diluting it in water to help it go down a bit smoother.

Although the merits of this sour liquid may be controversial, one thing is for sure: If there are any benefits to be had from drinking apple cider vinegar, they're most potent in the raw kind. So if you're going to drink vinegar, you might as well do it as a mother-lover.