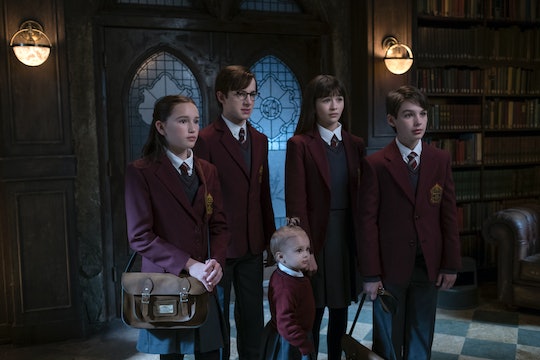 Warning: Season 2 Episode 4 spoilers ahead! In Episode 4 of the second season of A Series of Unfortunate Events, Jacques Snicket and Olivia Caliban took another look at the burned-out husk that the Baudelaires' house became and remarked that it was surprising so much could be caused by a single sugar bowl. But what is the sugar bowl on ASOUE? That's one mystery that has consumed fans since long before the show's premiere.

The sugar bowl was first mentioned by two of the Quagmire triplets in Episode 2, but a little more information was divulged in Episode 4. However, the dots remain difficult to connect. It seems this entire ordeal was set off by a sugar bowl stolen by Esmé Squalor, who also mentioned wanting revenge against the Baudelaires because Beatrice had stolen the object from her. There's a lot of thievery going on here, and that appears to be linked somehow to the secret passageway between Esmé's building and the Baudelaire mansion. But despite having a handful of clues, nothing about the sugar bowl added up in the first four episodes of the season.

Many fans have tried to figure out the answer to this very mystery, but it may be one that lingers on unsolved.

The strange obsession with a sugar bowl traces back to the books the series is based on, but unfortunately the source material isn't any more revealing than the Netflix show. A helpful fan-made Tumblr post on snicketsleuth provided further explanation: it's not actually the sugar bowl that matters, but something that was hidden inside it. In The Penultimate Peril, Esmé says the following:

Then you know all about the sugar bowl and what's inside. You know how important that thing was, and how many lives were lost in the quest to find it. You know how difficult it was to find a container that could hold it safely, securely, and attractively.

It seems as though the sugar bowl contains something desperately sought after by the two different sects of the V.F.D.: the heroic side operated in part by the Baudelaire parents, and the nefarious branch populated by the likes of Esmé and Count Olaf. The Tumblr post went on to say that in the books "sugar" appears to be a coded word for the V.F.D. with great significance, which likely has something to do with the sugar bowl and what was placed inside it.

But just what secrets the sugar bowl (or the Vessel For Disaccharides) is hiding are never made clear. In The Hostile Hospital, narrator and author Lemony Snicket mentions having stolen the sugar bowl from Esmé, which she seems to have blamed Beatrice for. It's possible Lemony and Beatrice were conspirators in the theft, or that Esmé got the true culprit wrong. Regardless, based on what Jacques and Olivia said in Episode 4, it appears Esmé wants it back — and may have even set the fire at the Baudelaires' in revenge for the bowl being taken in the first place.

Fans of the series have debated the contents of the sugar bowl for years, but one Reddit post by UltimateFatKidDancer sums up what appears to be a common assumption: the bowl has been empty for years, unbeknownst to the members of the V.F.D., though at one time it housed a very important cure of some kind. The theory speculates that the cure was for the deadly mushroom Medusoid Mycelium and it involved crossing horseradish with apples, but the truth remains uncertain. The question of the sugar bowl has never been answered.

But who knows? The Netflix adaptation might finally solve it; viewers will have to stay tuned to find out.