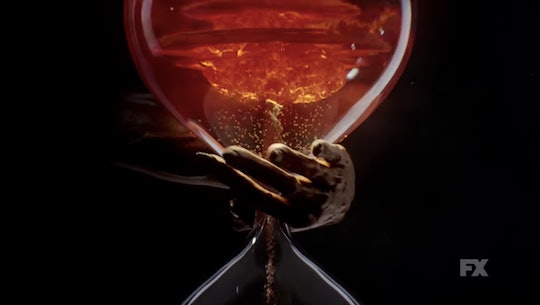 It's hard to know what to expect from a season of American Horror Story before it airs. The show is known for its unexpected developments and shocking moments, but the biggest clue always comes from each season's subtitle. It lets the audience know where the story will take place and allows them to theorize about how the central theme might be tackled. But what is the title of American Horror Story's new season?

Season 8 of AHS, which premieres on September 12, has been titled Apocalypse. The ominous moniker hints at ground not yet covered by the series: the end of days. According to Entertainment Weekly, executive producer Alexis Martin Woodall explained, "The story begins with the end of the world and then our world begins." It's set in the near future, within a year or so of 2018, but it quickly evolves from there.

Apocalypse will also bring together characters from seasons past, uniting the Harmon family of Murder House with the witches from Coven. The trailer depicts the return of these familiar faces, but places them in a new situations with never-before-seen figures. The title is little more than a hint: it may give the audience an idea of what might unfold, but no one can truly predict AHS.

The trailer begins with a post-apocalyptic vista: gray skies over a scorched earth littered with crashed helicopters and abandoned cars. A lonely figure walks through the debris. That seems to be the future, because it quickly cuts back to people running amok in Los Angeles, frantically getting into their cars to get out of town. There's no visible sign of what might have caused this cataclysmic event, but a glimpse of one specific character might reveal what brought about the apocalypse.

Before the season premiered, it was announced that Cody Fern would be playing the adult version of a character that showed up briefly at the end of Season 1: Michael Langdon. Michael had been conceived when ghost Tate Langdon (Evan Peters) raped his living girlfriend's mother, Vivian Harmon (Connie Britton). When Vivian became pregnant, she consulted with a medium named Billie Dean Howard (Sarah Paulson), who delivered a dark prophecy about her unborn child. Billie Dean said that a child born of human and spirit would bring about the end of days. She called him the Anti-Christ.

Fern's Michael can be glimpsed briefly in the trailer for Season 8. In one scene, he stands before a table of characters much like the witches' council of Season 3 and displays some of his strange abilities to them. He can make snow fall from the ceiling of the room, but if he's really the harbinger of the end times then he can likely do much more. Later, he asks Kathy Bates what she thinks and she replies, "Hail, Satan!"

The seeds for an apocalypse were planted in Season 1 when Michael was born. There was Billie Dean's pronouncement as well as Michael's own murderous tendencies; as a baby, he killed his nanny and laughingly left bloody handprints all over the house. While still in utero, his presence compelled his mother to consume raw meat and organs. It seems Michael has grown even more dangerous with time, and may have lent the season its title.

It's not clear what led to the world ending in Season 8 of AHS, at least not yet. But the apocalypse will be the event that triggers everything that comes after, so it makes sense as the heading for the season. It looks like Michael might play a major role in what happens, but it's just as possible disaster may strike for a reason no one could have seen coming.