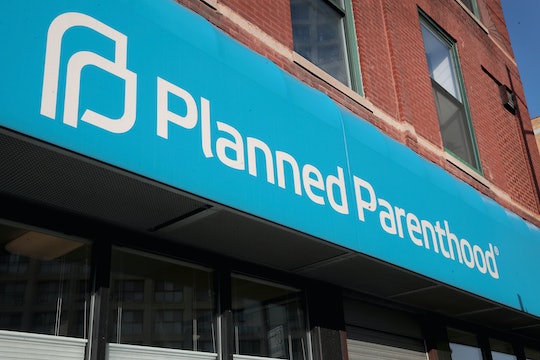 What Is The Title X "Gag Rule"? 22 States Are Suing The Trump Administration

On Friday, Feb. 22, the Trump Administration issued the final draft of a new rule that would result in huge changes for Title X — a program that provides reproductive health services to millions of low-income Americans. As with anything potentially affecting women's reproductive rights, the rule was met with plenty of outrage. Plenty of people might be wondering about now: What is Title X "Gag Rule," exactly? Because as it turns out, several states are planning to sue the trump administration over it.

Here's the short of it: The Title X "gag rule" would essentially de-fund Planned Parenthood and prohibit healthcare providers from referring patients to clinics that perform abortions — along with mandating other barriers to a woman's right to choose. How, you ask? Let's take a closer look.

On Feb. 22, the Department of Health and Human Services Office of Population Affairs posted a final draft the new rule. (You can read the entire thing here.) If this rule were to go into effect, any organization that provides or refers patients for abortions would be ineligible for Title X funding. Which is kind of a big deal, considering Title X covers things like cancer screenings, contraception, and STD prevention. As The New York Times reported, new rule would essentially shift federal family planning funds under Title X to anti-abortion and religiously-based groups.

Let's take a look at the chilling details:

Wait, what? But there is hope.

On Monday, March 4, California Attorney General Xavier Becerra filed a lawsuit seeking to block the new policy, according to The Washington Post. Additionally, Oregon Attorney General Ellen Rosenblum also announced Monday that she would be filing a separate lawsuit against the rule on Tuesday — along with 20 other states, according to CNBC. With Oregon leading the way, the states participating in this lawsuit include: Colorado, Connecticut, Delaware, Hawaii, Illinois, Maryland, Massachusetts, Michigan, Minnesota, Nevada, New Jersey, New Mexico, New York, North Carolina, Pennsylvania, Rhode Island, Vermont, Virginia, and Wisconsin. The District of Columbia is also involved.

During a press conference, Becerra explained:

This rule gags our doctors, nurses and other care providers from fully discussing reproductive health with their patients and it bans doctors from referring patients for abortion. Medical care should be between a woman and her doctor, not the president or the vice president of the United States.

And this is only the beginning, because organizations — like the American Civil Liberties Union and the Center for Reproductive Rights, according to The Washington Post — have also promised to sue over the "gag rule." In the meantime, let's hope the two lawsuits announced on Monday will be successful in stopping the rule from taking effect in 60 days. Women's lives depend on it.