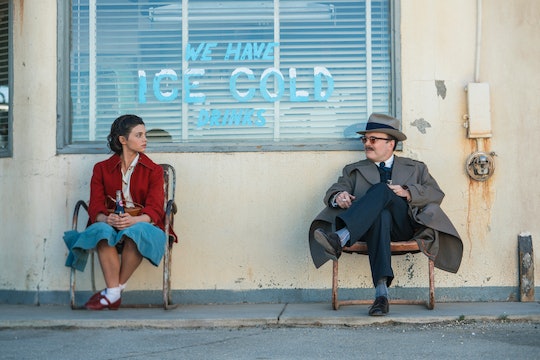 Fauna Hodel discovers something shocking about her past on TNT's I Am the Night. After being raised by an adoptive family, she learns that her biological grandfather is Dr. George Hodel, a Hollywood gynecologist and potential suspect in the Black Dahlia murder. And while the show may fictionalize certain aspects of the story, the Hodel family (and their connection to the murder) are very much real. But what is the true story of the Black Dahlia?

The Black Dahlia was a 22-year-old woman named Elizabeth Short who was brutally murdered in January 1947. She was found in a vacant lot in Leimert Park in Los Angeles. Her body had been washed and drained of blood, as well as bisected at the waist and grotesquely posed. The corners of her mouth had been cut to resemble an exaggerated smile. She was called the Black Dahlia by the press, for unclear reasons; some speculate that it had something to do with the release of the noir film The Blue Dahlia a year earlier in 1946, while The Daily Beast stated that it may have been a response to Short's supposed promiscuity. Slut shaming never ends, apparently.

Short's murder has never been solved, but there are theories about what happened to her — which is where Dr. Hodel enters the story.

Dr. George Hodel didn't appear to have any connection to Short at first glance, but he was a prime suspect in her murder. According to Cosmopolitan, after being accused of rape and incest by his teenage daughter Tamar (which he was later acquitted of), his home was bugged by the Los Angeles Police Department. While listening in on Hodel, they caught something strange. He allegedly said, "Supposin' I did kill the Black Dahlia. They couldn't prove it now. They can't talk to my secretary anymore because she's dead." The recording also captured a woman screaming.

The LA Times reported that Hodel was a suspect in the death of his secretary Ruth Spaulding in 1945, though that was ultimately deemed a suicide. Hodel passed away in 1999, having never been taken into custody or convicted of any crime. However, his son firmly believes in his guilt. Steve Hodel is a retired LAPD detective who became convinced that his father was Short's killer after finding two pictures of an unknown, dark-haired woman in his father's papers. But the woman wasn't conclusively identified as Short.

Steve's investigation found several curious links: his father had concrete delivered to the house a few days before the murder and a bag of the same exact brand was found near Short's body. Letters from the killer to the police seemed like they were Dr. Hodel's handwriting, though that couldn't be definitively proven either. Then there was the admittedly unusual statement of Dr. Hodel's caught by police on tape. But as fishy as it all might seem, the murder of Elizabeth Short is still officially unsolved.

I Am the Night will explore the case from the perspective of Tamar Hodel's daughter Fauna, who comes into contact with a journalist looking into Short's death. But even if they reach a compelling conclusion about what happened to Short, the real story has no answer. Solving the Black Dahlia case can only happen in fiction.