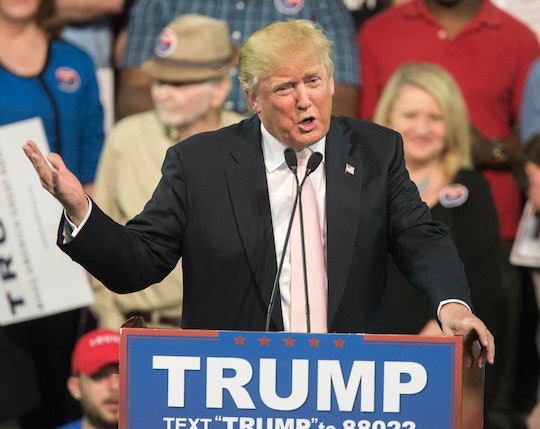 What Is The "Trump Tape" That Ted Cruz Referred To In His Super Tuesday Speech?

Ted Cruz thinks the New York Times has a tape that could keep Donald Trump from securing the Republican presidential nomination. Now, with back-up from Marco Rubio and Mitt Romney, he's leading the call to bring it out in the open. So, exactly what is the "Trump Tape" that Cruz is talking about?

Back in January, Donald Trump attended an editorial board meeting with the Times in order to make a case for why he deserved the paper's endorsement. He was unsuccessful, and the board endorsed John Kasich. In that same endorsement, the board wrote:

At a meeting with The Times’s editorial writers, Mr. Trump talked about the art of applause lines. “You know,” he said of his events, “if it gets a little boring, if I see people starting to sort of, maybe thinking about leaving, I can sort of tell the audience, I just say, ‘We will build the wall!’ and they go nuts.”

But apparently he went even further. During an off-the-record portion of the meeting, sources told Buzzfeed News, Trump reportedly implied that his hardline views on immigration were actually not as inflexible as he made them sound. Given that erecting a big, beautiful wall between the U.S. and Mexico is a cornerstone of his campaign, this could be, as the Donald would say, yuuuuuuuuuge.

The New York Times would not comment on the off-the-record remark unless Trump gave them permission to, and so far, he has not.

I call on Donald. Ask the New York Times to release the tape... It is either false, and if Donald didn't say that to the New York Times, then he deserves to have this cleared up, and releasing the tape can clear it up. The alternative is that it is true... that he actually now is telling the New York Times editorial board, "Pay no attention to what I'm saying on immigration because I, Donald Trump, don't intend to do anything I'm saying."

Now that Trump has swept the majority of the Super Tuesday, the release of this tape, if it is what Cruz thinks it is, could be the only thing to hold him back from the nomination. It seems highly unlikely that he'd allow the Times to release it if there's anything damning in it. But Trump is unpredictable. We'll just have to wait and see, or, alternatively, try to become best friends with the editorial board member/generally awesome writer Gail Collins, to find out what she knows.