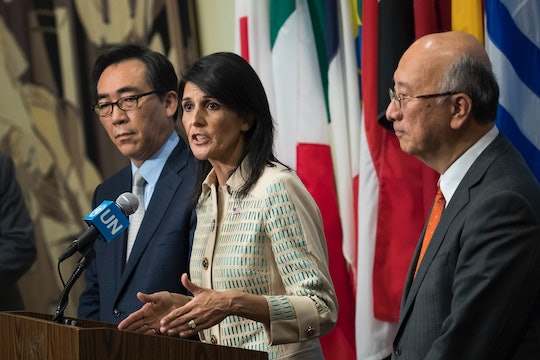 According to The Independent, the U.N. Human Rights Council is a 47-member group that was established in 2006 as a replacement for the U.N. Commission on Human Rights. Its primary role is to order investigations into governments that violate human rights, but it's far from perfect. In a Washington Post op-ed published Friday, Haley argued that the council has allowed membership to a number of countries with their own records of human rights violations, and that as a whole, the UNHRC unfairly targets Israel. Although Haley noted that the council has been able to "advance important causes," she argued that political interests have meant that "the victims of the world’s most egregious human rights violations are ignored by the very organization that is supposed to protect them."

In her piece, Haley claimed that Israel, a United States ally, is routinely unfairly targeted by the council. Furthermore, she noted that the United States is often the only country on the council to vote against the resolutions. Haley wrote,

Part of the reason why Israel is a constant focus of the council, according to Reuters, is that the ongoing conflict between Israel and Palestine is "a fixed item on the agenda," and is required to be discussed at every session of the council. Yet The Economist noted that, even with the disproportionate focus on Israel, the situation is improving: from 2006 to 2010, the group held six special sessions on Israel and Palestine, while it has held only one from 2010 to 2016. Furthermore, a UNHRC spokesperson said that the amount of time spent discussing Item 7 (which concerns Israel), has been cut in half, from 16 percent to 8 percent.

That might not be encouraging enough for Haley though, particularly given her additional concerns about the membership of Cuba and Venezuela on the council. Both countries, Haley wrote, have been given UNHRC membership "despite the systematic destruction of civil society by the government of Nicolás Maduro," in Venezuela, and the Cuban government's practice of "arbitrarily [detaining]" political prisoners, and of strictly controlling the media and the public's access to the internet.

Haley might not be wrong in her assessment, but a number of advocacy groups have argued that a United States withdrawal from the council would be the wrong move. According to Reuters, eight groups wrote to Haley last month claiming that Israel could actually be on the receiving end of even more unfair treatment without the support of the United States, and according to The Economist, even Israel itself has voiced its desire for the United States to at least temporarily remain.

What's more is that United States involvement has been shown to have a positive effect on the negative aspects of the UNHRC overall. During the administration of President George W. Bush, the United States withdrew from the UNHRC, according to The Hill, and studies have shown that it resulted in "a small group of rights-violators [dominating] the body," with an increased focus on anti-Israel resolutions. Conversely, America's re-involvement under President Barack Obama saw a big improvement. According to The Economist, former United Nations High Commissioner for Human Rights Navi Pillay said, “It’s a fact that the U.S. takes the lead in protecting people around the world,” and noted that American involvement was a big reason behind the council's 2014 investigation into human rights abuses in Sri Lanka.

It's unclear what the likelihood of a total withdrawal might be — it's also entirely possible that Haley will remain if the group appears open to reform. It also certainly sounds as though Haley's concerns are at least somewhat warranted, and she's not the first to voice criticism over the council's hypocrisy.

But leaving completely might not solve the problems she's raised, especially as they relate to Israel. And even though the council may be far from perfect, it seems that continued engagement could still be a step in the right direction if she is really concerned about pushing back against human rights violations.