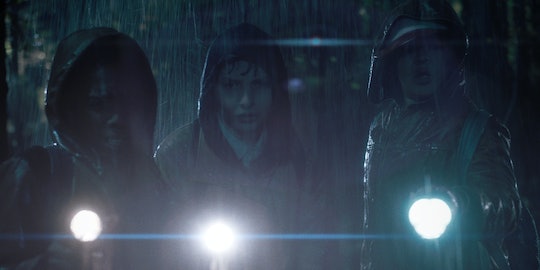 What Is The Upside Down On 'Stranger Things'? It's A Dangerous Place

(Warning: This contains spoilers from Episode 5 of Stranger Things.) The boys on Stranger Things filter their experiences through the lens of their favorite game, Dungeons and Dragons. It's how they make sense of the craziness of their lives. They turn the search for their missing friend Will into a quest, recognize real life monsters as monsters from the game, and strategize for real missions just like they would pretend ones. When they get a chance to overhear one of Will's conversations from wherever he is, they recognize something in his descriptions. They're able to connect what Will described to a location from Dungeons and Dragons called the Vale of Shadows, giving it a context that makes sense to them. But what is the Upside Down on Stranger Things?

Will describes the place he is as being like his home but different: dark, empty, and cold. The boys start to wonder if there could be another world that's the inverse of their own, a place they call the "upside down" of their normal life. This sparks an idea in one boy, Dustin, that has him pulling out the old D&D handbook and turning to a page about the Vale of Shadows. It's something drawn from the actual game, but it's been tweaked to better apply to what's going on on Stranger Things, where it seems to be very real.

"The Vale of Shadows is a dimension that is a dark reflection or echo of our world," Dustin reads. "It is a place of decay and death. [Unintelligible] It is right next to you and you don't even see it." That's very relevant to what is happening on the show: there does appear to be another world aligning with the normal world where dark creatures live. Scientists at Hawkins Lab are poking and prodding at one entrance to that world, though there are other entrances scattered all over Hawkins. Barb found herself on the other side; so did Will; so did Nancy. They could all just barely touch the normal world while over there, and Nancy was the only one who was able to come back.

While the Vale of Shadows might not be an official name, it certainly does the trick. In actual world of RPG, the Vale of Shadows seems to recur as a name without designating one particular place, so it seems likely the showrunners of Stranger Things plucked an appropriate name out of a real game and then utilized it for their own purposes. The idea of a shadow world that resembles our own but is not our own is popular in science fiction and horror because it upends what is familiar and makes it strange, even terrifying.

On Stranger Things, the Vale of Shadows holds the answers to all of the secrets in town (the Upside Down). It's the cause of everything that's going wrong; it's where the monsters come from. But what's scariest about it is how close it is to the real world, and how easily the barrier between the two can be breached.