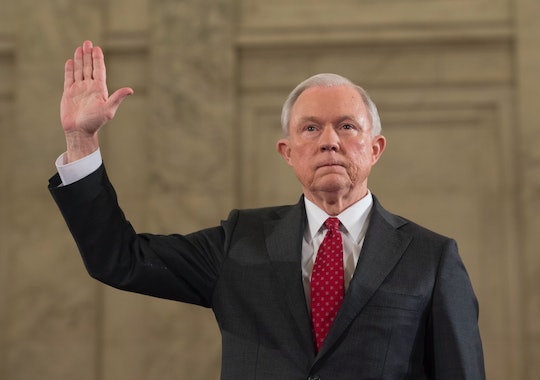 What Is The Violence Against Women Act?

In 1994 Delaware Sen. Joe Biden championed a piece of legislation aimed at providing a comprehensive, federal strategy to deal with and push back against violent acts against women with stiffer penalties for crimes against women, and better protections for victims. What is the Violence Against Women Act? Jeff Sessions opposed expanding the important measure, which has become one of the central arguments against his confirmation as Attorney General under President-elect Donald Trump.

Although the VAWA was passed in 1994, it was up for re-authorization in 2012 with a few new proposals, including that it's provisions would apply to same-sex couples, Native Americans, and would grant undocumented immigrants who have been victims of abuse temporary visas, according to The Week. The new provisions were opposed by 22 GOP Senators, including Sessions, who said in 2013:

I favor the Violence Against Women Act and have supported it at various points over the years, but there are matters put on that bill that almost seem to invite opposition. You think that's possible? You think they might have put things in there we couldn't support, maybe then they could accuse you of not being supportive of fighting violence against women?

Those who oppose Sessions' confirmation to the Attorney General post cast his opposition to expanding VAWA protections to Native American, LGBT, and immigrant communities as an indication he would be unwilling to enforce laws equally for all Americans. An open letter against Sessions' confirmation from The National Task Force to End Sexual and Domestic Violence argues his opposition to VAWA expansion proves he is unwilling to protect vulnerable, under-served communities. In part, the letter to the Senate Judiciary Commitee reads:

We are concerned that the positions that Senator Sessions has taken on immigration and LGBT individuals pose grave threats to vulnerable victims of gender-based violence. His consistent support of immigration policies that increase the barriers to safety for undocumented victims of sexual and domestic violence victims pushes immigrant victims further into the shadows and harms families and communities by allowing perpetrators (batterers and rapists) to abuse, traffic and assault with impunity.

During Sessions' confirmation hearing on Tuesday, Vermont Sen. Patrick Leahy questioned Sessions about his prior opposition to the Violence Against Women Act and asked if as Attorney General Sessions would be willing to enforce the entire law, including those aspects he opposed. Sessions' response was not particularly re-assuring to those concerned about his position.

"I will defend the statute if it's reasonably defensible," Sessions replied, according to The Week.

Making his confirmation even more alarming for women's advocates was Sessions' initial reaction to President-elect Trump's remarks captured by Access Hollywood cameras where he was heard bragging about grabbing women by their vaginas without consent. Just after the tape surfaced, when Sessions was asked whether he viewed the behavior described by Trump as sexual assault, Sessions responded, "I think that's a stretch," according to the Huffington Post.

When Vermont Sen. Patrick Leahy pressed Sessions during his hearing on whether grabbing someone by their genitals was assault, Sessions reportedly just answered "yes."

Despite these concerns and tough questioning, the Los Angeles Times reported Sessions is expected to be confirmed to the Attorney General post.

More Like This
An Ode To Kirstie Alley & Her Messy Self
Pinterest Predicts Their Top 2023 Trends In Parenting, Beauty, Fashion, Home, & More
Ryan Reynolds Posted A Festive Photo With Blake Lively (& Her Baby Bump) In Holiday PJs
Prince Harry Dressed As Spider-Man To Remind Grieving Kids It’s OK To Have Fun