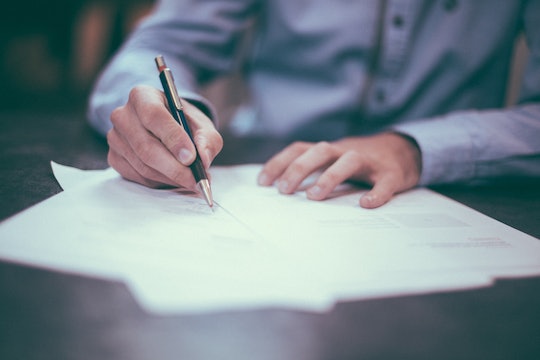 What Is The Wetterling Act? Jacob Wetterling's Legacy Helped Make The World A Little Safer

On Oct. 22, 1989, 11-year-old Jacob Wetterling was riding his bike home in his hometown of St. Joseph, Minnesota with his brother and their friend when a masked gunman reportedly stopped the three young boys. The reported gunman let the two other boys go, however, he allegedly kidnapped Jacob and the boy was never seen again. Twenty-seven years after his disappearance, Jacob's remains were finally discovered last Thursday. The Wetterling family, who never gave up hope that they would one day find their son and brother alive, said that their "hearts [were] broken" in a statement to NBC station KARE. In the nearly three decades since Jacob's kidnapping, his family has fought tirelessly to create and improve legislation that might be able to prevent this type of tragedy from happening to another family. The Wetterling's also helped establish the Wetterling Act, which makes the world a little bit safer for children.

The Jacob Wetterling Crimes Against Children and Sexually Violent Offender Registration Act requires all states to establish a registry that keeps track of offenders that have committed sexual or sexually violent crimes against children. Under this law, all states must verify the addresses of sex offenders every year for a minimum of 10 years. Sexually violent offenders are required to verify their addresses quarterly for the entirety of their lives.

It's hard to believe that this type of important legislation did not exist before 1994. Since its enactment as part of the Federal Violent Crime Control and Law Enforcement Act, Jacob's Law, as it's more commonly known, has been continually improved upon over the years to protect children from sexual and sexually violent perpetrators.

Jacob's Law was a critical first step in the difficult journey of protecting children from sexual predators. The sexual offenders registry allowed police officers to keep track of convicted sexual criminals in their neighborhoods, however, the records were kept private. Another tragic murder in the state of New Jersey showed that Jacob's Law needed to be fortified still. Seven-year-old Megan Kanka was raped and murdered by her neighbor, Jesse Timmendequas, in 1994. Timmendequas had already been convicted of sexually assaulting young girls twice, yet Megan's parents had no idea their daughter was living in such close proximity to a sex offender. Richard and Maureen Kanka, much like the parents of Jacob Wetterling, began to fight to protect other children from this type of crime.

The Kankas believed that Jacob's Law did not do enough to protect children from sexual predators. They teamed up with New Jersey General Assembly member Paul Kramer to pass Megan's Law, a subsection of The Jacob Wetterling Crimes Against Children and Sexually Violent Offender Registration Act. Megan's Law builds upon it's predecessor by requiring the information on sex offender registries to be made public. The Kankas and Kramer argued that if mandatory community notification on sex offenders had been available to them that Megan Kanka would still be alive.

The Justice Department reports that as April 2014 17 states, three territories, and 63 tribes had "substationally implemented Sex Offender Registration and Notification Act (SORNA) requirements of the federal Adam Walsh Act." There's still room for improvement, obviously, but these laws have definitely prevented horrible crimes from taking place. Jacob's Law was the seed that started the ever-evolving legislation that works to protect children from falling prey to violent, sexual predators.

Though there has since been pushback from various groups and studies, with some debating the effectiveness of sex offender registries, if nothing else, the Wetterling Act was a start. Let's keep Jacob Wetterling in our thoughts and be grateful for his family's tenacious dedication in trying to make the world a safer place for children. Minnesotans will keep their porch lights on in honor of Jacob and his family at this difficult time.