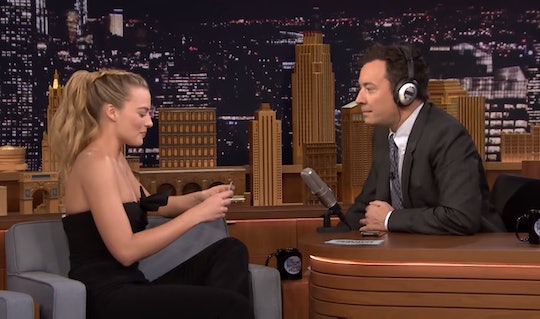 What Is The Whisper Challenge? People Are Using It To Announce Pregnancies

The latest viral challenge to hit the internet is also becoming the cool new way to announce pregnancies to grandparents and great-grandparents, but those who don't make a habit of watching late night talk shows might have never heard of it. So what is the Whisper Challenge, and where did it come from? Just like Spike TV's hit show Lip Sync Battle, it started as a game on The Tonight Show.

Host Jimmy Fallon has essentially turned his talk show into a televised game night with his celebrity guests, and although the rest of us aren't lucky enough to have The Roots at our disposal, the Whisper Challenge is a game that anyone can play, just about anywhere. Adding to the allure is the fact that there's no chance the Whisper Challenge will lead to a collapsed lung like the Cinnamon Challenge or a heart attack like the Ice Bucket Challenge. To play, one participant wears noise cancelling headphones (or headphones playing very loud music, if they're not concerned about permanent hearing loss). The other player then quietly says a phrase while their friend tries to read their lips. It may sound a little dull, but those who recall childhood games of Operator know that there's potential for hilarity.

There are apps available through both Google Play and iTunes for people who can't come up with their own phrases, but really, they're not necessary. And anyone who assumed that lip-reading was easy is in for a big surprise. The Whisper Challenge is a challenge I can finally get behind, because it's the first one in a long time where bodily harm isn't required, and, spit-takes aside, it seems pretty much mess free. Not a bad way to keep older kids busy in the back seat on a road trip, either, as long as parents don't have a problem with driving while hearing occasional squeals of laughter.

But back to the pregnancy announcements. Combining the sharing of happy news with a game invented by Jimmy Fallon's writers is a great way to have a little fun while also making sure that the elderly people you love get their 15 minutes of internet fame, and I'll be honest, it's always adorable to see the grandparents-to-be react to the news, no matter how it's delivered. Please forgive the portrait mode and experience the joy through these two grandparents:

As you can see, one of the great things about using the game this way is that, when two people are trying to decode the Whisper Challenge at the same time, one of them often gets it before the other one, and it's so cute to watch them existing in totally different realities for a few seconds... or sometimes, much longer.

The best part is that even though the participants briefly look foolish, they're never made to look like fools. In a day and age where we have a "YouTube star" whose claim to fame is pretending to kill his own son repeatedly in order to "prank" his girlfriend, it's nice to see a funny video where everybody's in on the joke.