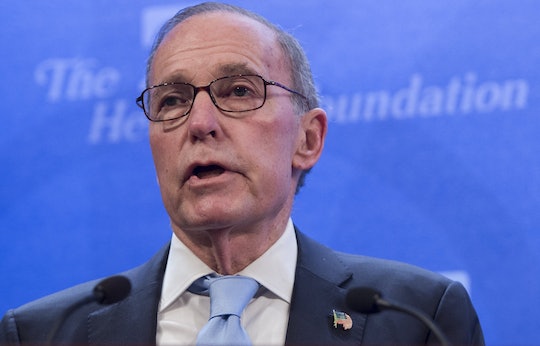 What Is The White House Council Of Economic Advisers? Larry Kudlow May Be It's New Leader

As Donald Trump works to fill the roles of his Cabinet members, many new (and controversial) faces continue to make headlines. The president-elect’s latest reported appointment might be longtime CNBC host and early Trump supporter Larry Kudlow, who is rumored as chair the White House Council of Economic Advisers. But, what exactly is the White House Council of Economic Advisers (CEA) and what are its members responsible for, as the incoming administration transitions into the White House? The 69-year-old conservative columnist and host of The Kudlow Report — who is reportedly only on a short list for the position at the moment — would essentially offer Trump advice on economic policy and issues facing the nation, both domestically and internationally.

The Detroit News reported on Thursday that Kudlow would be appointed to the important post "within the next 48 hours."

"And who better than Larry? He’s one of the great economists in this country," conservative economist Stephen Moore, who has worked with Kudlow to write Trump’s tax plans, said on Thursday, according to the newspaper.

Kudlow does have an extensive background in economics, serving as the late Wall Street investment firm Bear Stearns' chief economist from 1987 to 1994, but seriously lacks foresight skills that could certainly take a toll on the American economy.

Just as the Great Recession was beginning in the December 2007, Kudlow wrote in the National Review: "There’s no recession coming. The pessimistas were wrong. It’s not going to happen."

Regardless, if Kudlow does become Trump's chief economic adviser, what would he do in the White House as head of the CEA?

Firstly, the council is comprised of a chairman and two members, who are then supported by a staff of professional senior economists, staff economists and research assistants, as well as a statistical office. It's definitely a full office and not a one man operation.

According to the White House, the current council takes on the following responsibilities:

"He's a fantastic pick for the role, a great pick," Moore told Business Insider of Kudlow, adding that he was "a great communicator" and would be "an excellent salesman."

Kudlow up for the position — which has to be approved by the senate — would be another unprecedented move in Trump's transition, as he'd be the first one to hold the post without at Ph.D, according to The Wall Street Journal. He would, however, be another wealthy addition to Trump's Cabinet, which has so far been comprised mostly of multimillionaire executives.