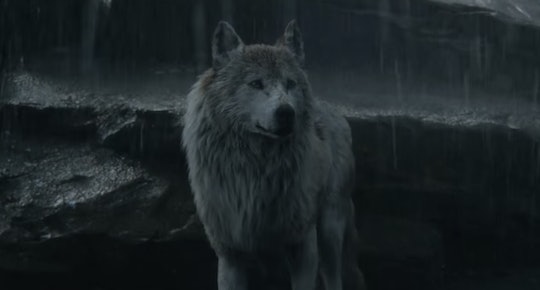 What Is The Wolf Law In 'The Jungle Book'? It's More Positive Than You Might Have Thought

The Jungle Book tells the tale of a boy raised by wolves deep in the jungle, but when rumors loom of dangerous predator returning — who will stop at nothing to hunt down the young “man cub” — the boy’s safety is in jeopardy and he must leave the home he’s always known and go to live with other humans. The story we all remember from our childhood movie nights follows the boy’s journey, where we meet some mischievous monkeys, a nutty bunch of British vultures, and a sleepy but charming brown bear. The trailer suggests the new film takes on a darker tone — more suitable for older kids — following the laws of the jungle, which may be a tough pill to swallow when watching a boy fight to survive in the wilderness. The wolves in The Jungle Book, for example, aren’t just a pack of wild canines, they take on the role of family. So, what is the wolf law in The Jungle Book, and how does it work?

The new Disney version of Rudyard Kipling’s classic tale hit theaters on Thursday, April 14, and the old gang who we all remember — Mowgli, Baloo, Bagheera, Shere Khan, King Louie, and Kaa — were all back tell the story in Jon Favreau’s new digitally animated adaptation, which took viewers on some new twists while pushing forward the themes survival, responsibility, and acceptance.

“If you can’t learn to run with the pack, one of these days you’ll be someone’s dinner,” a snarling black panther says to the jungle boy Mowgli at one point, reinforcing the laws of the wolves. The basic gist: If you learn the rules, you will survive. If you don’t, you’ll be on a dinner plate. You have responsibilities to protect yourself as well as others.

This theme is enforced further in the poem “The Laws of the Jungle” by Rudyard Kipling, which describes the rights and responsibilities of the wolves. It reads,

So, how does this all connect to us as an audience? And how about the younger crowd?

Younger children may have trouble distinguishing the themes and difference between fantasy and reality or the frequent life-threatening dangers Mowgli gets into — it’s rated PG — but the messages are loud and clear for society to take home, and is said to delight an array of audiences and is absolutely gorgeous to watch.

The laws have strong and positive messages about courage, teamwork, friendship, and a not-so-traditional family and our responsibilities surrounding them. Great reminders for both young and old. And if all else fails, we can always become one with our inner child and bop around to "The Bear Necessities."