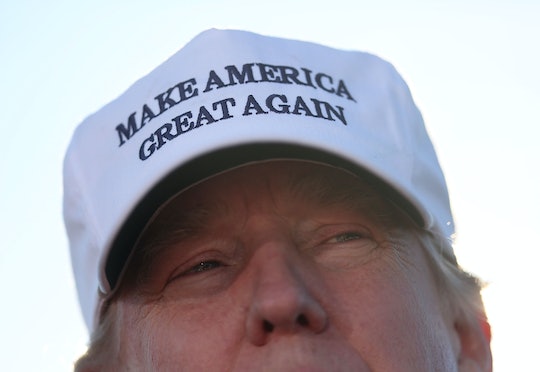 What Is #TheList? Trump Supporters On Twitter Are Using It To Threaten Journalists

As Election Day approaches, many are beginning to fear the aftermath more than the results. Polls indicate that Democratic presidential nominee Hillary Clinton will probably win, but ardent followers of Republican presidential nominee Donald Trump might continue to believe that the election is rigged, as frequently alleged by their leader, err, their nominee. Take #TheList, for example. What is #TheList? Trump supporters on Twitter are using this hashtag to threaten journalists — and, implicitly, the First Amendment.

On Monday, BuzzFeed reported that Trump supporters had taken to Twitter with #TheList, a series of Tweets targeting journalists and other media-makers for allegedly "misleading the American public" and "spreading lies and false information." The Tweets are accompanied by a photo of the targeted person with a large red X covering their face. CNN's Anderson Cooper and reigning media queen Oprah are among the most recognizable names on #TheList.

As Twitter trends go, this one isn't frivolous, nor is it inconsequential. It's the latest symptom of a disease that has afflicted the American body politic, and that is the disease of ignorance. In the previous weeks and months, Donald Trump and his surrogates (including former politician Rudy Giuliani and political commentator Sean Hannity) have told followers that the "mainstream" media is merely an extension of the Clinton campaign. "It’s NBC, it’s CNBC, it’s Univision, CNN… The New York Times, The Boston Globe, The Washington Post, all an extension — in every way imaginable — of the Clinton press office,” Hannity said last week on Fox News' Hannity.

Statistically, the number one predictor of being a Trump supporter continues to be education level: According to the latest ABC News/Washington Post poll, Trump leads Clinton by an astounding 79 to 19 margin over Clinton when it comes to white male voters who don't have a college degree. Meanwhile, a recent Associated Press-NORC Center for Public Affairs Research poll found that half of respondents who have a "favorable" opinion of Trump "have little to no confidence in the integrity of the vote count," as reported in the Associated Press. And a recent Gallup poll shows that only 14 percent of registered Republicans trust the "mass media."

To what extent has Trump caused this distrust, and to what extent has he taken advantage of the extant mistrust? That's an open chicken-and-egg question, but the polling numbers show that the more Trump talks about a rigged election bolstered by a biased media, the more people believe it. The issue of media bias, which has been simmering throughout the election, is now boiling over. According to The Washington Post (if they can be trusted), in recent weeks the "traveling press contingent" covering Trump's rallies has "been met with boos, shouts, and obscenities" as they enter the venues.

BuzzFeed's Rosie Gray reported that at a Trump rally in Cleveland, Ohio on Saturday, a man approached the press pen and and began yelling about the "lügenpresse," a German term that was used by the Nazis to denote a "lying press." Another Trump supporter shouted that the press members were all "bought and paid for." A third man, displeased with the scene, interjected, "Not all of them! Some of them are nice! They're nice people." Meanwhile, I Want It That Way by the Backstreet Boys played in the background.

During an interview with a local CBS news station in Miami, Florida this week, Trump stated that "the media is totally rigged," and bemoaned that "our press is able to say whatever they want and get away with it."

Which, for the record, is a good thing.