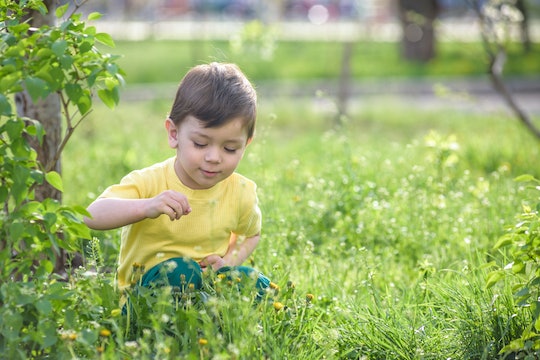 Summer is just a few weeks away and families are already starting to spend lots of time outdoors. As you get outside and enjoy the warm weather, however, your need to be on high alert for ticks. A recent viral Facebook video is showing one of the lesser known, but totally scary, side effects of a tick bite: tick paralysis. This is leading many to wonder what is tick paralysis and can it be prevented.

Scary Mommy reported on an Oregon mom who got a terrifying lesson in tick paralysis after her young daughter suffered a bite without even realizing it. According to the site, Amanda Lewis noticed that her daughter Evelyn was acting strangely one night just before bedtime. She didn't want to stand up to put on her pajamas and she was crankier than normal. By the next morning, the problem was much worse. Evelyn could barely stand up, and couldn't really walk, crawl, or even lift up her arms. Amanda shared a video of Evelyn on Facebook to see if any of her Facebook friends could help figure out what was going on, and just a short time later made the wise decision to head to the emergency room.

Luckily, according to Amanda's follow-up post, Evenlyn was able to be seen pretty quickly by a doctor, who gave her mom some startling news— the little girl probably had a tick. The doctor said he'd only seem a handful of children over the previous 15 years with the same kind of symptoms, and in those cases a tick was the culprit. Sure enough, they scoured Evelyn's body for a tick and found one in her hair.

According to the American Lyme Disease Federation, tick paralysis is more common in pets than in people, but kids are more likely to experience it than adults. It typically sets in about five to seven days after a bite. The first signs, according to the foundation, are usually tiredness and muscle pain or numbness. It usually starts in the legs and travels upward through the body, eventually paralyzing the face and tongue. In the most severe cases in can cause convulsions and lead to respiratory failure or even death.

Lewis said she's grateful it didn't go that far for her daughter, thanks to the doctor who was familiar with the signs. Little Evelyn was back to her normal self within a day or so of the ordeal, and the doctor said because of the type of tick she was bitten by, she shouldn't be at risk for lyme disease, another major possible side effect of a tick bite, according the Centers for Disease Control and Prevention.

The Lewis family's terrifying brush with a tick will hopefully remind other moms and dads across the country to be extra vigilant about the bug spray and protecting their kids from bites this summer. In addition to insect repellant, Today's Parent noted that wearing long pants and sleeves will help prevent ticks, as will showering right after being outdoors to wash away ticks before they have time to attach.