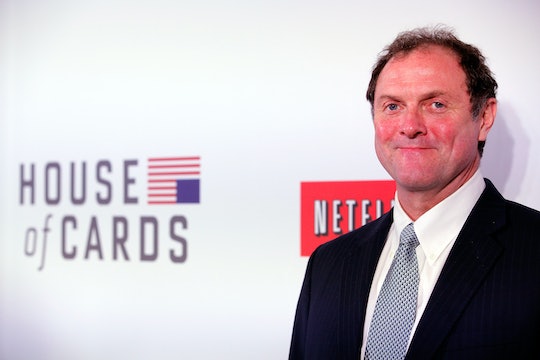 What Is Tom Hammerschmidt Doing Now? 'House Of Cards' Brought Back Its Biggest Players

Season 4 has been fully loaded with surprise after surprise and has included bombshell after bombshell, and the shock and awe is far from over, you guys. (Fair warning, spoilers ahead!) After Lucas Goodwin made an attempt on President Underwood's life, it threw tons of his skeletons out of the closet, one which included his old editor. So what is Tom Hammerschmidt doing now? House of Cards has been pretty good at wrapping up storylines when they're finished, and I won't lie, Hammerschmidt's storyline would've appeared done after he refused to adapt the Washington Herald to modern times. So why is he back in Season 4, and what the hell does this mean for Frank Underwood?

Hammerschmidt is tucked away and living a pretty low-key life in the aftermath of his journalism career. His character only comes back after Lucas Goodwin's death, when federal officials begin an investigation into the accusations Goodwin leaves in a suicide note, one that, if true, will put President Underwood in very hot water. In Goodwin's note, he claims that Underwood had him arrested and jailed basically because he knew too much, and that Underwood was responsible for the death's of both Peter Russo and Zoe Barnes. Faithful fans that know all of this to accurate, true, and 100 percent Underwood-inspired, but it was always Goodwin's word against the president, and I think we can all agree how hard that is to prove.

Hammerschmidt is very much living a life well out of the public eye, and who can blame him given all he witnessed in his years as editor of the newspaper, but Goodwin's death has thrown everything into disarray, and if Dunbar can prove that Goodwin's accusations are true, it could mean the death of not only Underwood's big for the White House, but also his political career and his legacy entirely. Hammerschmidt, because of his closeness to Goodwin, could serve as the final nail in the coffin.

In Season 3, Hammerschmidt visits Goodwin in jail (he was arrested for cyber-terrorism), where he begs his former boss to take a closer look at the details surrounding Zoe Barnes' death. Goodwin begs his boss to write an article that at least lays out the speculations that there could be something bubbling just beneath the surface, but Hammerschmidt's search comes up unanswered and empty.

What Hammerschmidt understands so well is that in an Underwood-controlled world, the best way to live is to fly just under the radar, out of sight, and completely out of mind. But his presence in Season 4 is sure to ruffle some feathers, and to be honest, I can't wait to glimpse the dirt hiding in his closet.