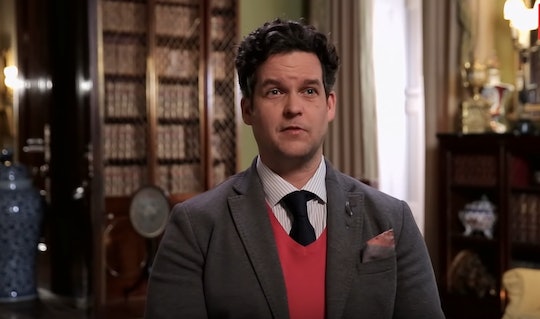 Tom's Instagram From '90 Day Fiance: Before The 90 Days' Doesn't Reveal Much

Darcey Silva and Tom Brooks’ are the ultimate will-they-won’t-they couple on this season of 90 Day Fiancé: Before The 90 Days. Darcey flew all the way to England to meet the man of her dreams, but he doesn’t seem as sure about their connection as she is. Fans know plenty about Darcey from her past seasons on the show, but many are looking to Tom’s Instagram from 90 Day Fiancé to see what he’s really about.

I visited Tom’s Instagram page last week, and it looks like he’s deleted numerous posts since then. Now, his IG only consists of a few selfies and memes, so you won’t find any social media insight into his personal life. But, Tom did reveal quite a bit about himself on the show, so it's a good place to start.

In Episode 2, as Darcey is headed to the UK to meet him, Tom describes himself as a 39-year-old from Nottingham, who works as a jet-setting distributor for a sportswear fitness brand. “I have been globe-trotting a little, doing the casting for the models, playing on the back of boats in Brazil, dancing with beautiful women,” he says. “I do live a bachelor’s lifestyle. I have had a numerous amount of women in my past, but I am getting to an age where I know I need to settle down, and I have been looking more for that. It’s a difficult one. I’m good at getting to the bedroom, but everything after that is like I’m in unknown territory.”

Tom says he met Darcey four years ago when she was still in a relationship with Jesse Meester. Her love story was featured on Season 2 of 90 Day Fiancé: Before The 90 Days, when she went to Amsterdam to meet Jesse. Things didn’t work out for the two, and Tom says he was there to support Darcey in those tough emotional times.

“The end of the relationship between Darcey and Jesse I think I was a shoulder to cry on for long periods of time,” Tom says in Episode 2. “But after a couple of months, I was like ‘Hold on a minute, I don’t listen to problems, and there I am listening to her problems, so I must really care for this woman.’ So, I spoke to Darcey and I said, ‘You know, maybe we can have something as well.’”

He also says he had his share of one-night stands and lovers, but with Darcey things are different. “I don’t necessarily want to treat her as I would any other woman that I’ve been with,” Tom explains. “I really want to give me and Darcey a chance, and I want to see where it’s going to go.”

For now, Tom’s Instagram presence is limited to just a handful of posts, so if you want to know more about him, you’ll just have to keep tuning in through the rest of the season.