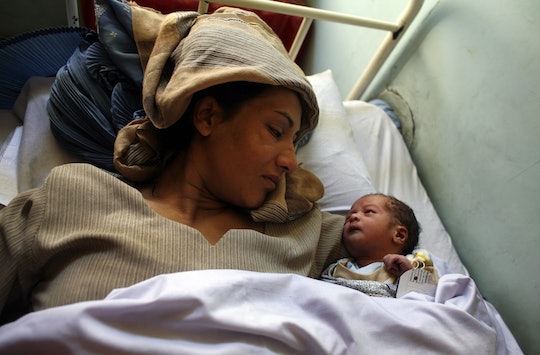 This Inexpensive Drug Could Save Moms From Blood Loss After Childbirth

Despite all of the medical progress that has been made over the years, an “unacceptably high” number of women still die from preventable causes related to pregnancy and childbirth every day, according to the World Health Organization (WHO). Now, scientists believe that an overlooked and inexpensive drug developed more than 50 years ago can also be used to save new moms from blood loss after giving birth. So, what is tranexamic acid and how would it work to help with his horrible public health problem?

Tranexamic acid is a blood-clotting agent that stops bleeding quickly by "helping keep naturally forming blood clots intact," according to NPR. Traditionally and historically, the medicine has been used to treat soldiers’ traumatic wounds and to reduce bleeding from oral surgery, like having a tooth pulled. But now, a new study has shown that it could also be used to prevent severe bleeding after giving birth, also known as postpartum hemorrhage — a leading cause of maternal mortality.

It was first used back in the 1960s and the drug’s inventor — a female doctor in Japan named Utako Okamoto who died last year — had hoped that it would be used to save mothers from bleeding uncontrollably during childbirth, but at the time, a clinical trial never got underway, according to The New York Times.

Now, after a major international trial of the drug involving over 20,000 women in 21 countries, researchers found that tranexamic acid reduced maternal bleeding deaths by a third, according to a study published in The Lancet earlier this week. NPR reported that none of the women included in the trial experienced any serious side effects and the medicine didn't increase the risk of dying of other causes either.

And the best part? According to The New York Times, it costs less than $2 a dose, possibly cheaper in developing countries, and does not require refrigeration, making it incredibly useful for women in remote places where electricity and refrigeration are hard to come by or are even considered luxuries.

"If you can save a life for approximately $3, then I believe that's worth doing," Haleema Shakur, who directed the trial at the London School of Tropical Medicine and Hygiene, told NPR.

The lingering question on everyone's minds now is how to make it widely accessible and available across the globe, especially in developing countries where 99 percent of all maternal deaths occur. Global health experts aren't there quite yet, but having this evidence available is certainly a good place to start.