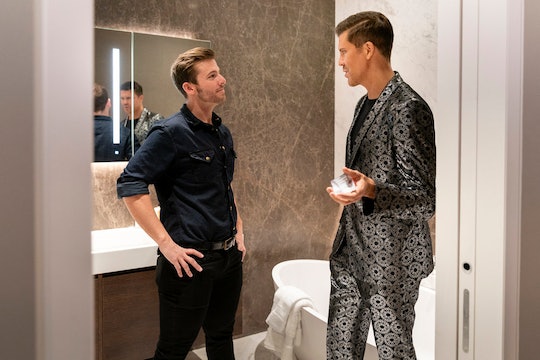 Million Dollar Listing New York returns to Bravo, and this season, fans will meet new cast member, Tyler Whitman. As he joins returning star brokers Fredrik Eklund, Ryan Serhant, Steve Gold, and Luis D. Ortiz, this newcomer is shaking things up. Of course, fans want to know everything about him. So, what is Tyler Whitman’s Instagram from Million Dollar Listing New York and what does it reveal?

Under the user handle @tkwnyc, Tyler’s Instagram is filled with fun-loving photos and videos of him, his friends, and property ads. Ahead of the Million Dollar Listing New York season premiere, he shared a promo shot of himself from the show, but explained that he won’t be seen until later in the season. “It all begins tonight,” he captioned the post. “The mystery will last a little longer, however, because I don’t come in and shake things up until later in the season! But I’m worth the wait (positive self talk).”

As described on his Bravo bio, Tyler is originally from the South, but he moved to New York to pursue his real estate career. According to the profile, after Tyler had a bad experience working with a broker to find his own home, he was inspired to become a broker himself. He now works for the start-up firm, Triplemint, where he helps people find their dream homes in the New York City area.

When talking to Julep, the blog site for Triplemint, Tyler said his plans for the future include building a family and buying a dream home in New York City for himself. “I will always be in real estate, I just love it,” he said. “Next on my agenda is starting a family, buying a brownstone on the Upper West Side, and being a true New Yorker who never leaves (except to visit my home in the Hamptons, of course).”

When talking to the site, Tyler also revealed that after losing a significant amount of weight, he now keeps fitness at the forefront of his everyday life and wants to inspire others with his story. “Health and fitness are now huge passions of mine,” he told the outlet. “As someone who has lost 175 lbs, I feel inclined to share my story and help people along their own fitness journeys in some way. I’m considering a book, or a video series… stay tuned.”

On his Instagram, Tyler shared a few before and after photos of himself, and in one post, he detailed the impact of this body transformation. “I’ve never had a struggle dreaming big, but believing any of it could actually happen for me was not a consideration,” he wrote in the caption. “I actually believed that no matter what actions I took, obesity was here to stay because it had to be genetic. Well as you see, I lost the weight and made a major commitment to fitness. When I shattered the belief that I could never lose the weight, it changed the way I thought forever. I realized with a plan, and focus, and the right people by your side, anything is possible.”

In the preview for the new season, as the returning brokers discuss how boldly newcomers are stepping in to the game, Tyler talks about his weight loss, and mentions that he's now ready to “take over.” It looks like Tyler is going to leave a lasting impression this season, and I know fans can’t wait to see all the drama he brings.