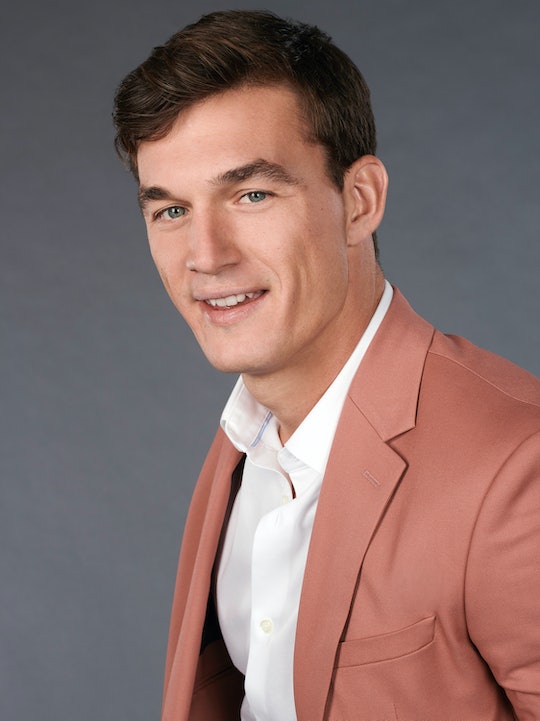 Tyler C. Is Bringing His A-Game To 'The Bachelorette'

Believe it or not, Hannah Brown’s season of The Bachelorette is here, and fans are already skimming through contestant profiles to pick their favorite. One suitor, Tyler Cameron, has been getting a lot of buzz, and he’s already being hailed as an early frontrunner. Viewers want to know everything about him, including what he does for a living. So exactly what is Tyler’s job?

According to his ABC bio, Tyler is a general contractor from Jupiter, Florida who has an MBA from Florida Atlantic University. He was drafted by the Baltimore Ravens, but had to leave football behind due to severe shoulder injury. The 26-year-old has a private Instagram account, but in its bio, he’s linked few modeling agencies, including Next Models (this is his headshot and profile), and he describes himself as a “custom home builder.” So, general contractor, custom home builder, model, football player, and MBA... Tyler turned out to be a multi-talented jack of all trades.

With a little bit of internet sleuthing, I did find an old interview of Tyler’s from the time that he was drafted by the NFL. When talking to CBS 12 in 2017, he revealed that he was a tight end and quarterback during college, and that he was counting on starting a career with the NFL. At the time of the interview, Tyler had just gotten signed by the Ravens, and he talked about how excited he was for the future.

"It was definitely a relief," he said. "There's a lot of work ahead, so it's just a start. To get my foot in the door, that's all I wanted. I wanted my shot, and I'm gonna give it all I got." Unfortunately, due to his injury, Tyler wasn’t able to play football for the NFL, and that’s really heartbreaking to think about. But it may explain why he had to make such diverse changes in his career.

His Linkedin page isn’t very telling, but in the scarce information it does have, Tyler reveals that went to Wake Forest University in Florida, where he pursued a Bachelor’s in Communication while minoring in Entrepreneurship and Sociology. He also describes himself as “extremely committed to the greater good of others” and a “versatile leader that can bring people together to form a team to reach uncharted territories.” At the end of the bio, he writes, “putting a smile on someone's face is all I can ask for.”

So now that you know what he does professionally, you probably want to know what he’s like personally. Well, in his Bachelorette profile, Tyler comes across as a pretty laid back guy who’s just looking for love. “When he's not working, he's spending time with his family, scuba diving and hanging out with his rescue dog, Harley,” the profile reads. “Tyler's only been in one serious relationship but says he will know when he meets the right one because that love will ‘smack him right in the face.’" Apparently, he also loves to dance, despite the fact that he tends to embarrass his friends when he’s on the dance floor, and skydiving is at the very top of his bucket list.

For now, that’s about all there is to know about Tyler, but as Hannah’s season kicks into full gear, I’m sure fans will get to learn plenty more about him.

The Bachelorette premieres on Monday, May 13 at 8 p.m ET on ABC.