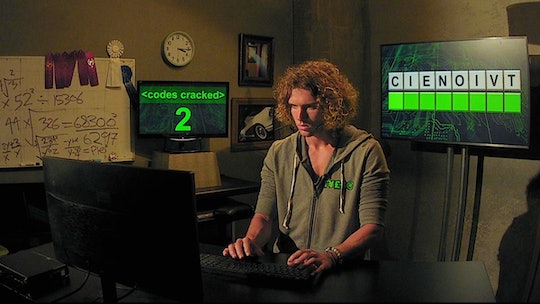 Big Brother has now officially entered jury season. From this point on, every one evicted from the house will be going to jury, which is nice but it's not the $500,000 grand prize they're all supposedly after. So it's a good thing that some people still have power apps to play. One of those people is Tyler, but what is his power app on Big Brother? It'll keep him safe during nomination ceremonies.

Tyler's power app is called "The Cloud," it allows him to sit in a cloud ahead of nominations to protect himself from being nominated. He can use this before regular nominations or before the veto is used. When he got the app he was told he'd have eight weeks to use it, so he still has a good amount of time left. However, as Sunday night's episode revealed, Tyler's app is only helpful if he suspects he'll be nominated.

On Sunday night's episode, a new twist was introduced into the game called the "Hacker Comp." The winner of this competition got the power to replace one of Angela's nominations, pick a player in the veto competition, and cancel out one person's vote. Haleigh won the competition and decided to take Scottie off the block and replace him with Tyler, shocking a lot of the houseguests, including Tyler.

Though Haleigh made a big move, it will most likely be all for naught. Tyler has proven time and time again that he's a comp beast and since he's currently sitting on the block he'll be able to play in the veto competition. If he wins the power of veto he can take himself off the block, and he already made it clear he's looking for who nominated him so he can retaliate. Even if Tyler doesn't win the power of veto, as long as one of his Level 6 alliance members does he's coming down. Plus, pretty much everyone in the house loves Tyler, so JC, Sam, and Scottie, would also be willing to take Tyler off the block if they got the POV.

Thus, it's very likely Tyler won't be sitting on the block come eviction night, which is an indication of why Tyler doesn't even really need his power app. This is the first time anyone has had the guts to take a shot at Tyler and honestly it may be the last. For whatever reason, Haleigh seems to be the only one who's noticed Tyler is playing his game right down the middle of the house. The FOUTTE alliance, now known as The Hive, still hasn't grasped why they're being blindsided every single week, or that Tyler is even in the Level 6 alliance.

Since everyone trusts Tyler, no one's going to put him up for eviction, which is why he doesn't need his power app. However, if someone does turn on him, he's still got the app in his back pocket, which will keep him safe. This is why most fans are confident Tyler will win this game. He's got every one in the house buying what he's selling and he's somehow managed to get people out of the house without getting too much blood on his hands.

Whether you love him or hate him, the fact is Tyler is playing a great game and as long as he keeps doing what he's doing he can definitely walk away with the grand prize of $500,000 at the very end. That is, if he doesn't end up with a bitter jury who just doesn't want to see him succeed. But that seems unlikely since Tyler's successfully stayed on everyone's good side. Except Haleigh's.