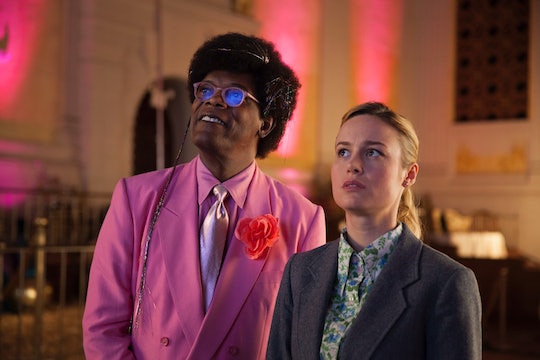 'Unicorn Store' Proves All Your Unicorn Dreams *Can* Come True

It doesn't matter if you're a Marvel fan or not — you know Brie Larson is out there kicking butt and taking names. Fact. As a serious force to be reckoned with on-screen, Larson's directorial debut, Unicorn Store, is now available to stream on Netflix and stars former Marvel co-star Samuel L. Jackson. Considering she's starred in films as diverse as Room and Captain Marvel, I'm super curious as to what Unicorn Store is about and if it can stand out next to all her top-notch credits. I mean, the girl's got serious acting game, but where will directing fall?

More Like This
What To Stream Right Now For Kids Who Love History
The Great-Granddaughter Of Alice In Wonderland Is Getting Her Own Show
Peppa Pig Is Going Camping In A New Live Show & You’re Invited!
Here Are 25 Shows You Can Feel Good About Your 2-Year-Old Watching

The Netflix summary says of Unicorn Store: "After failing out of art school and taking a humdrum office job, a whimsical painter gets a chance to fulfill her lifelong dream of adopting a unicorn." Um, art school and unicorns with Captain Marvel and and Nick Fury? Sign me up. Though that description doesn't do the full, spoiler-free blurb justice. According to The LA Times, Larson plays artist, Kit — the once child fairy turned art school failure who moves back home with her parents, played by Joan Cusack and Bradley Whitford. She utilizes her "skills" to run a self-help outdoors camp, which sounds good in theory, but as a depressed woman herself, Kit finds solace in infomercials. So relatable.

Kit eventually begins working for a temp agency, though she still remains dissatisfied with life. It's not until she receives a string of invitations to The Store which is a hallway filled with oddities, an ice cream shop, and hay. Yes, hay (for the unicorns). In this otherworldly, mystical place, she meets a salesman (Jackson) who tells her she'll receive a unicorn if she can follow his specific, albeit odd, instructions. From there, Kit enlists the help of hardware store employee, Virgil (played by Mamoudou Athie) to fully prepare for the unicorn's arrival. Because, why not? Sounds totally legit.

This isn't the first Larson came across Unicorn Store. She said in the same LA Times interview she auditioned for the role of Kit five years ago, but she didn't get the part and the project fell apart. After creating two short films — The Arm and Weighting — she felt ready to take on more. That's when Unicorn Store presented itself again, but this time with a need for someone to take the reigns.

Before the premiere of Unicorn Store at the Toronto International Film Festival, Larson said of the project, "I feel like this film is like an abstract self-portrait of myself," Larson said in an interview before the festival. "It's totally a metaphorical journey of not only my experience of being an actor and learning how to be true to myself in the face of people telling me no or that I was wrong or telling me to change, but it was also directly my experience directing this film."

Larson also revealed she originally wanted an unknown actress to play Kit, but after taking it on herself, she made it her mission to give another up-and-comer an opportunity to shine. Thus came Athie, a Maryland boy originally from Mauritania who attended the Yale School of Drama before nabbing his first big acting gigs.

Unicorn Store is here to remind you that while adulthood has its share of good times it's often lacking the glitter and innocence left behind. It also doesn't hurt that the prize for Kit's quest is a unicorn which definitely speaks to the little kid in me.