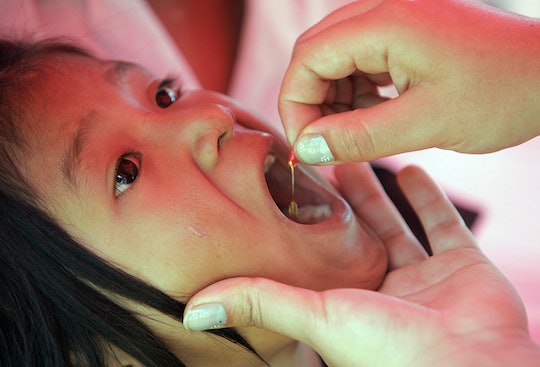 What Is Vitamin Angels And How You Can Help

Every mom and dad would agree it’s important to get kids the nutrition and nourishment they need to keep growing. Luckily, a well-balanced diet that is rich in protein, fruits, vegetables, carbohydrates, and fat is obtainable in the United States and other developed countries (even if those well-balanced diets are expensive). But unfortunately, not all parents are able to provide for their families in the same way. All over the world, including some areas of Africa and South Asia, new mothers and newborn babies who don’t get enough vitamin A are facing blindness, and sometimes even death.

Nicole Silber, a NYC-based registered dietitian and lactation counselor who specializes in pediatric nutrition, says that while there are a host of vitamins and minerals that play crucial roles in any child’s development (like iron, calcium, vitamin D, and vitamin C), we can’t forget the importance of vitamin A. “Vitamin A's most critical role is in vision development, but it also plays a role in immune system, skin, hair integrity, and even bone health,” Silber says. The vitamin is fat-soluble, which means in order for the body to dissolve and absorb it, a person’s diet needs to be rich in fat, and it is found in foods like carrots, sweet potatoes, spinach, and kale.

American moms are lucky because vitamin A and the fatty foods that are needed to process it (like eggs, avocado, olive oil and cheese) are usually just a short walk or car ride away from home. But many children around the world have to go without these provisions, and it puts their lives at risk. In 2004, UNICEF and The Micronutrient Initiative released a report that found a vitamin A deficiency affects 40 percent of the developing world’s children under five, and results in an estimated one million children’s deaths each year.

Today, the problem persists. The World Health Organization states “vitamin A deficiency is the leading cause of preventable blindness in children and increases the risk of disease and death from severe infections” and that “an estimated 250 million preschool children are vitamin A deficient.”

But some are trying to change that. Vitamin Angels is one of the few charities that fights to bring essential vitamins and minerals to those in need. Founded when a relief agency asked Howard Schiffer, an accoucher, if he could supply 100,000 vitamins to survivors of the 1994 Northridge Earthquake that struck Southern California, Schiffer’s life mission has been to supply important vitamins and improve quality of life around the world. And, as it turns out, he has. In 2015, Schiffer announced that his team provided 230 million doses of vitamin A to 48 million people in 54 countries. With the support from corporate partners like Walgreens, Vitamin Angels’ efforts to fight preventable blindness, malnutrition, and other causes of preventable deaths has saved lives.

Romper has partnered with Walgreens to bring you this video and promote Vitamin Angels’ goal to bring affordable and lifesaving vitamins to families around the world. Watch it to learn more about Vitamin Angels and how you can help.

This post is sponsored by Walgreens. Walgreens is partnering with Vitamin Angels to help provide vitamins for undernourished children around the world.