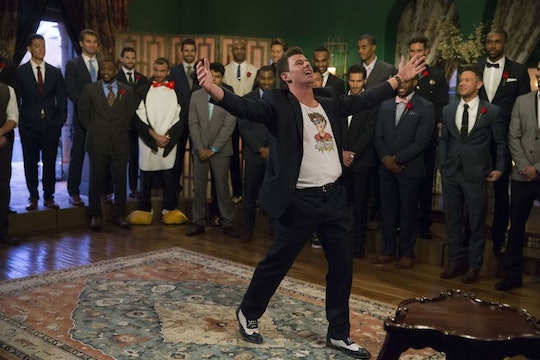 Lucas' Catchphrase On 'The Bachelorette' Is Still Confusing

Whether you understand him yet or you’re completely annoyed by his overabundance of energy at any given time, Lucas the "whaboom" guy on The Bachelorette is probably someone you’re still wondering about from the Season 13 premiere. But since he says the word more than he explains it’s meaning, fans are probably still wondering: what is whaboom? Lucas has a unique catchphrase that he even had printed on a sleeveless T-shirt he wore under a sport coat for the first ever cocktail party this season, so he’s definitely dedicated to making it a thing.

According to Lucas in his introduction package featured on the season premiere of The Bachelorette, "The word whaboom grew from the word boom, but it has a lot more energy behind it," and as you see him playing soccer in the footage, it’s a bit more clear that whaboom was initially meant as an exclamation of sorts. And as Chris Harrison said during the Facebook Live cast announcement, whaboom, is "a lifestyle. It’s an essence. It’s who he is. It’s a noun, it’s a verb, it’s an adverb. You can be Whaboom, you can be whaboomed, and you can Whaboom. You can call somebody a Whaboom."

I know, that doesn’t clear it up as much as fans might like, but as the season progresses (and Lucas looks like he’s going to pass out each time he shakes his head at lightning speed to say "whaboom"), maybe we’ll all come to understand it a little better. Maybe? Someday?

Although it was once its own unique phrase not found in any dictionary, the entrance of Lucas on Season 13 of The Bachelorette prompted someone (perhaps even him) to add it to the official online urban dictionary. And now, part of the extensive definition listed on there is that whaboom is "a way to express excitement, love, intense emotion, feelings towards others and things. It is something we all have inside of us, and we just need to let it out!"

Whaboom is listed as Lucas’ occupation, but according to his LinkedIn profile, the contestant is actually the creator of comedic video entertainment at YknotWorld.com and has appeared in a few different commercials in the past. In case it wasn’t already clear, he has a strong personality and isn’t afraid to do whatever it takes to make that known, so it’s safe to say that whaboom is part of all of that.

Whaboom was born out of a way to make an exclamation, but obviously it’s evolved into something much more and The Bachelorette is making it possible for us all to live the whaboom lifestyle, even if we don’t necessarily want to.