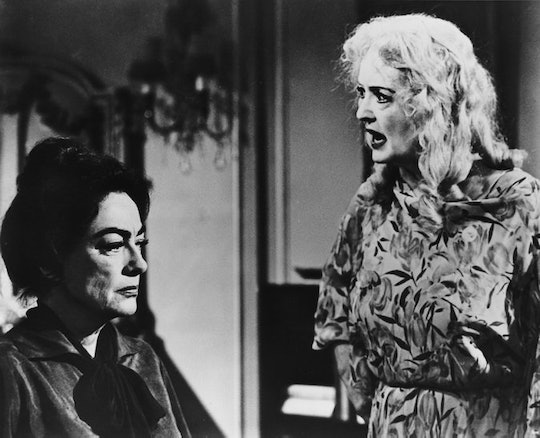 'What Ever Happened To Baby Jane?' Is Iconic

Ryan Murphy has put together a new anthology series called Feud, which follows some of history's biggest and most interesting — you guessed it — feuds. The first installment, Bette and Joan, follows legendary actresses Joan Crawford and Bette Davis as they came together to film the thriller What Ever Happened to Baby Jane? in the 1960s and what happened after the film was released. However, many viewers of Feud may not have even heard of the movie until now. So what is What Ever Happened to Baby Jane? about? The film, in many ways, parallels Crawford and Davis' own life (though to a greater, more murder-y extreme).

The film is based on Henry Farrell's novel by the same name, which follows Baby Jane (Davis), a former child star, and her paralyzed sister Blanche (Crawford), who also used to be a successful movie star herself. The sisters live together in a crumbling mansion in Los Angeles and Jane — who has become a deranged alcoholic — is vengefully bitter and jealous of Blanche and the lavish fame she used to receive prior to her accident. Blanche informs Jane of her plans to sell the mansion and put Jane in a sanitarium, which as you can probably imagine doesn't go over too well.

As the film goes on, Jane continues to treat her sister poorly, feeding her a roasted rat and taunting her endlessly. It's clear that Jane is unwell and at one point she even dresses up as a little girl, hoping it'll help her recapture her Hollywood glory days. Both of the sisters miss the lives they once had in the spotlight. (Sound familiar?)

The film includes a bit of a twist at the end when Blanche — close to death after everything Jane put her through — confesses to her sister that she herself had caused her accident, not Jane, who had been driven mad by guilt over what happened. That's when Jane delivers the iconic line that is also very fitting to Davis and Crawford themselves: "All this time we could have been friends." There is a follow-up film, Hush... Hush, Sweet Charlotte, which was released in 1965 and also stars Davis as Charlotte Hollis. This film was also based on a novel of the same name by the same author of Baby Jane. Crawford was supposed to star it in as well, but ended up dropping out.

What Ever Happened to Baby Jane? was Davis and Crawford's comeback film after being cast aside because of their age. Though Davis and Crawford obviously weren't playing themselves in the film, they could relate to the characters who were Hollywood's castoffs in their own right. Davis received an Oscar nomination for her role as Baby Jane, though Crawford received none, which only further flamed the fumes of their animosity toward each other.

You can see the feud unfold firsthand when the series premieres on Sunday, March 5 at 10 p.m. ET on FX.