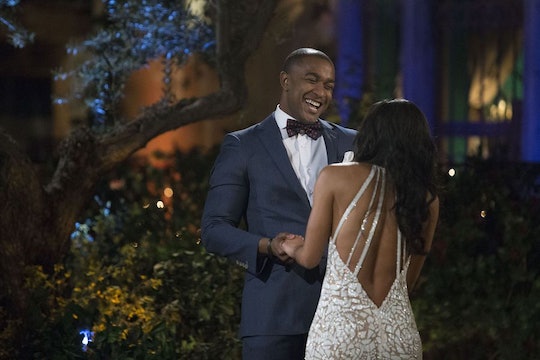 Will From 'The Bachelorette' Has A Steady Gig

Will Gaskins, who is 28 years old, has already seized some opportunities to shine on Rachel Lindsay's season of The Bachelorette, in spite of having yet to be invited on a one-on-one date. He charmed Rachel pretty much out the gate (or the limo, in this case) with a Steve Urkel limo exit, giving him the chance to transform into the suave, handsome Stefan Urquelle before her very eyes. (Ellen DeGeneres was skeptical about the efficacy of this move, but whatever.) So what is Will's job prior to The Bachelorette. The contestant has been gainfully employed by the same company for the past five years.

He works as a sales manager at an office furnishings company called Herman Miller, handling the company's dealings in Westchester County, New York and Fairfield County, Connecticut. As his LinkedIn bio states, his expertise is in "taking space and making it great!"

Will studied politics at Ithaca College, where he graduated with a BA in 2010. He also played varsity basketball for the school, so being chosen for Rachel's basketball group date coached by Kareem Abdul-Jabbar really played to his strengths. His younger sister actually followed in his footsteps and also played varsity basketball for Ithaca College. According to one of Will's Instagram posts, they're an IC legacy family, with two generations attending the college.

After his graduation in 2010, there's a two-year gap on Will's LinkedIn profile, but he seems to have found his footing at his current position. He started at Herman Miller in 2012 and has been with the company ever since. Will attributes his professional success to growing up in a military family, writing on his LinkedIn bio:

I grew up in a Military household so the tenents [sic] of hard work and determination were engrained into me early and often throughout my life. This carried over from home life, to school, to sports and my everyday interactions with people. I then joined the basketball team at Ithaca College where I truly learned how to be an effective part of a team and eventually how to be a leader and example for those around me. I am a firm believer of the need to follow before you can lead.

But as we've already learned, Will is not so buttoned up that he can't literally strip off his shirt and grind on giddy lady strangers in the audience of The Ellen DeGeneres Show, which he had approximately zero qualms doing, judging by his enthusiasm for that group date. Hopefully, we'll get to gauge his one-on-one chemistry with Rachel soon.