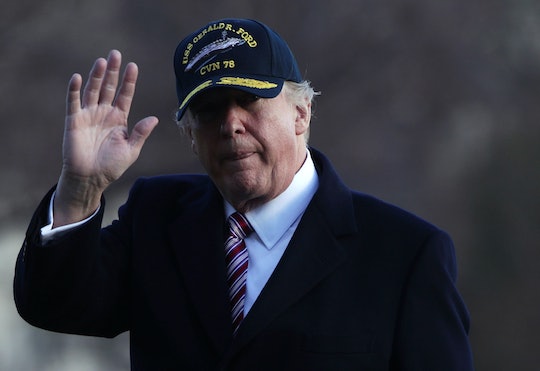 Another day, another scandal. Less than two months into his presidency, Donald Trump has used Twitter numerous times to convey his feelings about television shows, allegations against him and his administration, and, most recently, to make shocking claims about former President Barack Obama. In a series of tweets posted Saturday morning, Trump accused Obama of having Trump Tower phones tapped during the presidential campaign last fall. While there has been no evidence on this matter, and an Obama spokesman flatly denied the allegation, there are still many questions left unanswered, including why Trump felt the need to tweet about the allegation in the first place, without consulting advisers first. Some may even be wondering what wiretapping is, and why anyone would have targeted Trump in the first place.

First, the basics. Merriam-Webster defines wiretapping as the act of tapping into "a telephone or telegraph wire in order to get information." Technically speaking, wiretapping in standard phones usually involves someone "attach[ing a] phone somewhere along the part of the line that runs outside [a building] to essentially pick up conversations remotely," according to How Stuff Works. More recently, the FBI developed a system called DCSNet, a "comprehensive wiretap system that intercepts wire-line phones, cellular phones, SMS and push-to-talk systems," Steven Bellovin, a Columbia University computer science professor and longtime surveillance expert, told Wired in 2007. As the outlet described, "DCSNet is a suite of software that collects, sifts and stores phone numbers, phone calls and text messages." DCSNet and traditional, old-school wiretapping are just a few methods used to surveil subjects.

However, Trump's claims go beyond simply accusing Obama of attempting to obtain information. Among the outrage in his early-morning tweet storm, Trump also implied that Obama had broken the law while he was still president. "Is it legal for a sitting President to be 'wire tapping' a race for president prior to an election?" Trump posted, after already making his claim against Obama for wiretapping. "Turned down by court earlier. A NEW LOW!"

While much can be said about Trump's claims and the lack of evidence, his source of information on the alleged wiretapping is perhaps more important than what he actually said.

Much as Trump's comments on "what's happening in Sweden" were literally based on a report from Fox News, his latest claims have a conservative-bred basis to them as well. As several sources have reported, a conservative radio show spoke on the same allegations Trump made just days later. Trump-friendly conservative outlet Breitbart also reported on the same claims as well, writing,

Levin called Obama’s effort “police state” tactics, and suggested that Obama’s actions, rather than conspiracy theories about alleged Russian interference in the presidential election to help Trump, should be the target of congressional investigation.

In fairness, these reports were based on several actual facts, though some argued that they were interpreted incorrectly. Breitbart cited two FISA [Foreign Intelligence Surveillance Act] requests made in July and August of 2015 as evidence of the Obama administration attempting to begin surveillance on Trump. However, even if those claims were real, then they actually would mean trouble for Trump, not Obama, as Wired's Brian Barrett pointed out.

According to CNN, "Warrants to tap into someone's phones in the course of a federal investigation would be sought by the Department of Justice, which conducts investigations independent of the White House and the President." Basically, if there were wires tapped in Trump Tower, it would only be because the Department of Justice thought there was sufficient evidence to suggest federal crimes.

Wiretapping is a complicated matter, but the allegations Trump has brought against Obama still shouldn't be ignored, even if they're not accurate: Trump could be deflecting attention from a larger issue, trying to get in front of an upcoming story or scandal, or just attempting to play to his voters by blaming Obama for something again, in order to curry favor. Whatever the reason, Trump's latest Twitter rant has prompted a serious conversation that we'd all do well not to ignore.