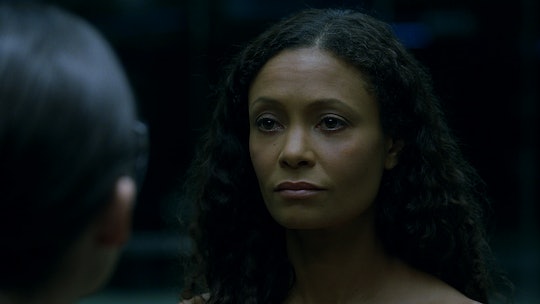 What Is Wrong With Maeve On 'Westworld'? She's Making Connections

From the start, things have been going wrong with the hosts on Westworld. With every episode they seem to get closer and closer to understanding that something is happening to them – even if they have no ability to comprehend what that something is. The hosts have their memories wiped at the end of their narrative loops, but specters from their pasts are leaking through despite that. It's affecting hosts across the park, including Maeve, the madame of the Mariposa Saloon. Though the technicians don't appear to have fully caught on in Maeve's case, something is definitely happening with her. But what is wrong with Maeve on Westworld?

It appears that Maeve's troubles begin when another host, Dolores, says a key phrase to her: "These violent delights have violent ends." It's the same thing Dolores' father whispered to her right before he malfunctioned, and after that Dolores herself started to remember things that she should have forgotten. For some reason this phrase – a line from Shakespeare's Romeo and Juliet – seems to unlock something in the hosts. Once she hears it, Maeve begins to have flashbacks to unexplained memories that may be a prior storyline. But that's not all that's going on with Maeve.

In the flashbacks, Maeve is happy. She lives in a small, isolated house in the middle of a field with a child who may be her daughter. They play together; the child brushes Maeve's hair. But soon enough they're beset upon by a Native American tribe who attempt to scalp Maeve (storylines in the park are written in the most stereotypical ways on purpose), though she is able to get away. She runs into the house with the child, gun in hand, and then someone appears at her door. At first it looks like one of her attackers, but then the figure transforms into the Man in Black – hinting at his involvement in Maeve's previous storylines. It is implied that he does scalp her, though it's not shown; considering he's been walking around scalping hosts, it seems likely that's what he was doing there.

However, Maeve is doing even more than simply recalling past events. While being serviced to remove something left behind in her abdomen during a previous botched clean-up, she wakes up on the operating table, so to speak. Maeve escapes, running through the labs where the hosts are being worked on by technicians, and sees the piles of "dead" hosts being cleaned before they are returned to the park. She passes out and is returned as well, but it's clear that those memories remain with Maeve.

Though the Shakespearean line spoken to her does seem to have some importance to what is going on, there may be other factors at play. When Maeve is underperforming in her job as madame, one of the technicians increases her emotional acuity so that she can read the guests better and give them what they need. Is it possible, then, that Maeve's increased perception in combination with her memories is causing what's happening to her?

Dolores is experiencing reveries as well, and she has also had encounters outside of the park where she is conscious, much like Maeve in the lab. But the two hosts react differently; though Dolores wants to understand, it seems like she has trouble trying to actively figure out what it all means. Maeve looks like she's beginning to make connections, and that increased emotional acuity could be to thank for it.