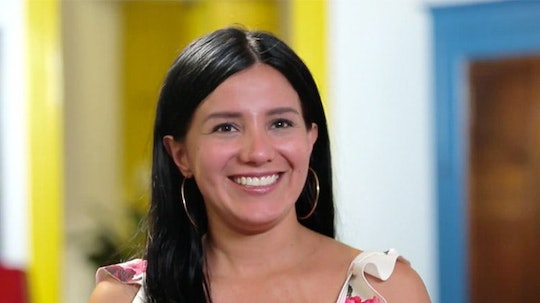 Ximena's Life Is Starting To Worry Ricky On '90 Day Fiancé'

Melissa's out and Ximena's in on Ricky's story on 90 Day Fiancé. Ricky and Ximena's relationship got serious pretty fast on the latest episode, but how could Ximena just take off and leave work for a period of time to meet her American beau? What is Ximena's job on 90 Day Fiancé? Ricky is starting to question her motives.

In the episode "Just A Try," Ricky revealed that Ximena doesn't work; explaining how she could just drop everything and take a flight to meet someone from a Colombian dating site. This is where he begins to question why she's with him. It also doesn't help that he's been lying to producers, which explains why how they got so close so quickly (the two admitted to being "intimate" one of their nights together). In reality, Ricky didn't just call up Ximena and have her see him out of the blue. They have been talking for a while, and Ricky has even sent Ximena and her family money to get through hardships.

Ricky became alarmed when he found out that Ximena got a nose job, especially because she herself isn't working — and he's been financially supporting her. When Ricky confronted her about this, she said that the surgery was medically necessary and not covered by the small amount of insurance she has. Ricky seemed satisfied by the answer.

That's not the only trouble in paradise with these two, though. There's that whole "Ricky came to Colombia for a different woman" thing. Yes, Ricky still hasn't told Ximena about Melissa — but she's getting wary. Apparently, the night they were together, Ricky called Ximena "Melissa." Oof. Ricky played it off by, how else, lying! He said that Melissa was a member of the Before the 90 Day production crew, and Ximena seemed to believe him.

In my opinion, both Ricky and Ximena have been pretty lousy with each other. Lying is one of the cardinal relationship sins, and they can't have a solid foundation if it's based on lies. Seeing as this is reality television, I have a feeling the truth about Ricky's trip to Colombia will come out soon, but it's frustrating to watch their courtship unfold like this. Towards the end of "Just A Try" he even attempts to be truthful, but backs out at the last minute. Ricky wants to wait a little longer. Ugh, wait until when, the Before the 90 Days finale? (Probably.)

Interestingly, Ricky has deleted his Instagram, so there's no way to keep up with him on social media. Perhaps he was tired of the comments about his actions on the show, in which case I wouldn't blame him. Fans know, however, that Ricky pretty much reserved his Instagram for his professional photography. That being said, I wonder why he felt compelled to delete his account. Is it related to Before the 90 Days at all? Is it related to Ximena? To Melissa?

Viewers may never find out why Ricky deleted his Instagram until he reveals it on the show or in an interview (if that even happens). On the show, however, he has even more pertinent things to start explaining. Every episode that goes by and Ricky doesn't tell the truth to Ximena about Melissa, I just like him less and less. I know that the shooting schedule was just a few weeks, not dragged out months and months like how the audience is experiencing it, but still. If Ricky wants anything real with Ximena, he has to come clean. Whether he follows my advice is up in the air — as is whether the two are still together and planning to get married.