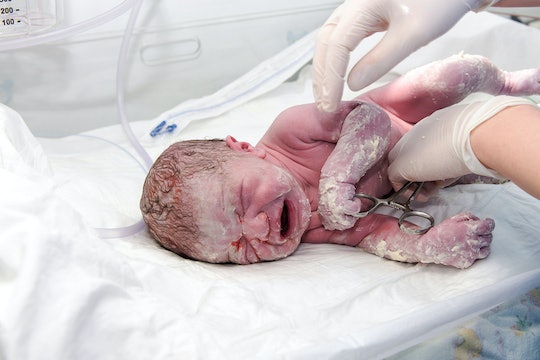 What Is Your Baby Covered In When They're Born?

The big moment is here. You've given birth to a healthy baby boy or girl, but your baby doesn't look anything like the smooth-skinned newborns in all the movies you've seen. What is your baby covered in when they're born? Other than traces of blood and amniotic fluid, that thick white substance you notice is called vernix, according to Parents. Many people compare it to cheese or wax, but I would describe it as paste-like. (It's as lovely as it sounds.)

While it may look a little gross, vernix protects your baby in utero and continues to provide benefits after birth. That's why The World Health Organization (WHO) recommended postponing your baby's first bath for the first 24 hours or, if this isn't possible, at least six hours after birth. The impulse to bathe your newborn right away isn't surprising, given the hygiene-obsessed culture. The Atlantic reviewed multiple studies that found Americans to be among the most frequent shower takers in the world. But just as science is discovering the benefits of washing your hair less often, research published in Neonatology showed vernix to be as effective a skin cleanser as the stuff in bottles you buy from the drugstore. Unsurprisingly, nature provides a bunch of miracle creams and oils that provide everything humans need, and babies are no exception.

As you prepare for the birth of your baby and think about what you might like that experience to entail, it's a good time to give vernix another look and change your perception of it from "yuck" to "wow." Vernix may not be as well-known as the placenta or amniotic fluid, but it plays an equally important role in keeping your baby safe and healthy in utero, and this uniquely human substance continues to protect your baby after birth.

According to "The Biology and Role of Vernix," published in Newborn and Infant Nursing Reviews, vernix helps your baby regulate their body temperature, a benefit that could be especially important for premature infants. The same article also noted that "Specific anti-infective and antioxidant molecules have recently been reported in vernix." In other words, vernix is a useful barrier between your baby's skin and the outside world of germs and bacteria they have just entered. In addition to warding off infection, vernix's 80 percent water content makes it a natural moisturizer.

Scientists are still conducting research on the protective functions of vernix after birth, but existing studies show this cheesy substance to be a hard-working barrier that performs multiple roles in keeping baby healthy, warm, and soft-skinned. Who knows, maybe someday soon you'll be able to buy vernix-infused moisturizing creams for adult skin.