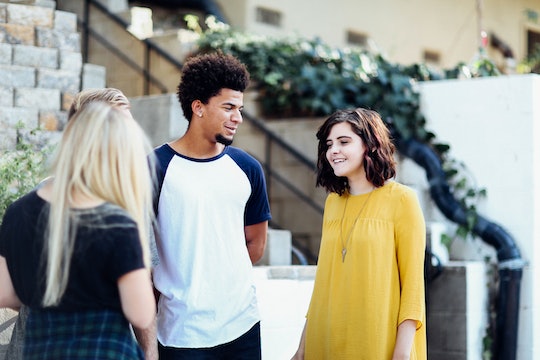 What It Says About Your Personality If You Talk A Lot, According To Science

When I was a kid, my family would always make jokes about how I was talkative. They would say that I could talk someone to sleep and not even notice it. Though it was kind of funny back then — and still is now when we have our days of reminiscing — the need to talk a lot actually says something about your personality, according to science.

To be honest, I used to think that talkative people were either just full of themselves or very outgoing, depending on how they handled their conversation. But Huffington Post noted that those with Type A personalities can be talkative people. Type A personalities relate to individuals who are highly competitive and get irritated easily when things disrupt their progress. The site also noted that people with Type A personalities tend to talk over others and interrupt them, too. Others usually have an issue with keeping up with these types of people in conversation because their drive and need to be competitive is like none other.

Additionally, those who are extremely talkative could suffer from ADHD as seen in their impulsivity. Healthline noted that those with ADHD also have a habit of interrupting others when they speak and anxiousness. ADHD sufferers deal with restlessness and often feel as if their motors cannot shut off. Due to this, they may talk more and desire to be the center of attention.

Although being talkative can be a great way to be social, it can also cause many relationship issues as well. Healthline went on to note that talking over people in conversation, inattentiveness and the issue of becoming bored easily can cause people to pull away from you. To others, you may seem as if you are selfish, insensitive, irresponsible, or uncaring.

Talking a lot in conversations can really be a positive trait to have, but ensuring that you are not always the dominating force in the conversation, is a way to ensure that you don't come across as too self-indulgent to others. Excessive or compulsive talking can mean more than just one thing, so if there is a concern about why you are doing it, just be sure to see your doctor to determine what the cause of it could be.