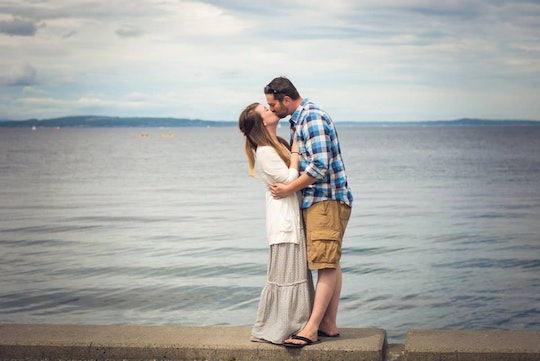 My partner walks through the door and instead of giving him a kiss, I give him a sigh. I’ve written four articles, attended three conference calls, made two meals, and am one toddler tantrum away from losing my ever-loving mind. There are bruises on my legs from my 1 year old’s aching teeth, I’ve been hit a multitude of times while my son giggles and smiles and looks at me with sweet, loving eyes, and I’ve been crawled over and under for six solid hours, my son wanting the undivided attention I cannot give him. I’ve rocked him to sleep twice, held him through one semi-severe cry after he hit his head, and haven’t been able to pee without him reaching for the toilet paper. It is only early evening and I've already hit my contact quota. I do not want to be touched anymore.

My son pulls at my shirt and legs when I’m cooking him a meal. He lays his head on my lap when I’m in the middle of a meeting. He pulls my hair by accident (and sometimes on purpose), and I haven’t gone 15 months without someone touching me (what seems like) every hour of every single day.

My partner sets down his coat and puts his arms around me, but I cringe. It’s not his touch that bothers me, it’s touching in general. It’s not his presence that leaves me feeling suffocated, it’s anyone’s. Even my own.

I don’t want to be touched. I want space.

My mom-friends tell me I'm touched-out, a common occurrence among mothers who breastfeed, co-sleep, and are tugged on by their children all hours of the day. (Aka every mom.) It's difficult to feel like you're comfortable in your own skin when that skin is constantly bitten and pulled and slapped and cuddled and kissed and consistently in contact with another human being.

So instead of hugging my partner and kissing him on the cheek, I hand him our son and ask for at least one uninterrupted hour of alone time. I don't want anything to hit my skin except the air I'm breathing and a heavy, hopefully warm, blanket. I don't want anyone to lay on me or hold me or tug at me for an extended period of serene, blissful time. I want to sit down on the couch and barely feel the arm rests as I enjoy not holding absolutely anyone.

Should a mother — a truly loving mother — really feel an aversion to her child's constant touch? Should I really be upset about my child always wanting to be in close contact with me when there are so many other women who are yearning for one second of contact with their child?

Because that little voice that whispers in my ear and tells me I should feel bad may carry a certain amount of truth, but it's also powered by ill intentions. It wants me to feel fundamentally flawed, not grounded in perspective. It wants me to tell myself that I'm a horrible mother doing a horrible job raising her soon-to-be horrible child. It doesn't remind me that I'm an over-worked mother who does a lot for her family and is entitled to some personal space.

It's been probably 30 minutes now, and I can still hear my son giggling in the next room while my partner makes silly roaring sounds. I could go into the other room and join them, but I'm not going to. I'm going to take the next half hour and enjoy being untouched by everyone. I'm going to enjoy being alone, so I can enjoy cuddling up to my family and kissing them both later on.

Tonight, I don't want to be touched, because I'm lucky enough to know that tomorrow I'll be bitten and pulled and slapped and cuddled and kissed and consistently in contact with another human being, all over again.

More Like This
Yes, It’s Possible To Get Pregnant If You Have An IUD
50 Love Song Quotes That’ll Give You The Feels
Bringing Home A Partner For The Holidays Isn't Always A Hallmark Movie
50 Warm & Wise Quotes About Blended Families