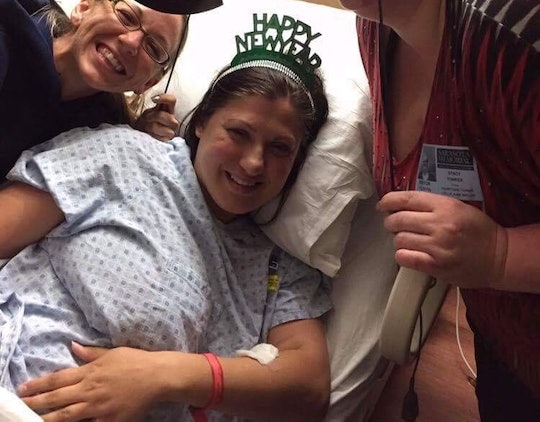 The question for Charlotte Potticary this New Year's Eve is whether to go to a party... or bank on the hospital. Potticary, a Canadian, is pregnant with her first child, and due shortly before New Year's. “There’s a definite possibility it will be a New Year’s baby,” she tells Romper. New Year's Eve births coincide with fireworks, revelry, and an outsized amount of excitement around the first babies born in the new year. Doctors and nurses wear party hats, hospital staff may chant encouragement at your delivery room door, and you might even be offered some non-alcoholic bubbly between contractions.

“It was a crazy experience,” Alanna Geweye, who went into labor with her second child on the evening of December 31, 2016, tells Romper. She had given birth to her first son at the same hospital four years earlier, but her New Year’s Eve delivery was altogether more spectacular. “I’ve never received so much attention before.”

Apart from it being a holiday, one of the main reasons having a baby on New Year’s Eve is such a celebratory — and perhaps competitive — occasion is because of the widespread practice of honoring the “first baby of the New Year.” The tradition crosses time zones and may have its roots in ancient Greece. As cities around the world blast off midnight fireworks, they also welcome the first babies of year — from Hong Kong to Canberra to Dublin to New York.

In large cities, babies who nab the number one spots are usually born within minutes, if not seconds, of midnight. That makes for slim odds: Your chances of giving birth within the first minute of the New Year are 1 in 526,600. In a smaller community, it may be a bit easier to earn the title. For example, in Iceland last year, the first baby of 1980 gave birth to the first baby of 2017.

Geweye gave birth to her son Colton Slater Pryce, the first baby of the New Year in Sarasota County, Florida at 12:39 a.m., January 1, 2017. He arrived on his due date, just as she’d been hoping. “I’d heard fun stories about how you get pampered for having the first New Year’s baby,” Geweye said. She remembered hearing about the first babies on the news when she was younger. “I always thought it would be so cool to have a New Year’s baby.”

They were like, 'You got to push, I’m sorry we had to come and see you because we haven’t had a New Year’s baby here in a while, and you’re in the lead, and nice to meet you, and good luck!'

Geweye went into labor at work around 6:00 p.m. and arrived at Sarasota Memorial Hospital to find nurses and her OB-GYN in New Year’s Eve hats. She tells Romper that the nurses had a way of checking to see how many other women in the area were in labor, and how close they were to giving birth. “I guess it’s like a race to see who is going to have the first New Year’s baby,” she says.

Nurses and other hospital staff kept stopping by her room to cheer her on. “They were like, ‘You got to push, I’m sorry we had to come and see you because we haven’t had a New Year’s baby here in a while, and you’re in the lead, and nice to meet you, and good luck!'” Geweye says, adding that she walked and bounced on a birthing ball, hoping to speed up her labor. She felt some pressure to delivery quickly, but overall she said it was a supportive, fun atmosphere.

The extra support was especially meaningful to Geweye because her significant other had to be away for work. Two close friends were at her side and hospital staff turned the TV to a live broadcast of the ball dropping in New York City’s Times Square. A nurse popped a bottle of non-alcoholic sparkling pomegranate juice, Geweye recalled. “And I was like, ‘I thought I couldn’t drink anything,’ and they were like, ‘no, this is different.’”

The nurses all blew horns and threw stuff up in the air. It was crazy. Everybody celebrated again like the ball had dropped when he came out.

“In between my pushing and contractions, we were counting down,” Geweye said. “I was literally pushing, and we were literally bottoms-upping with little red Solo shot glasses with pomegranate juice when the ball was dropping. I’ll never forget that.”

About 39 minutes later, Geweye’s son arrived. “The nurses all blew horns and threw stuff up in the air. It was crazy. Everybody celebrated again like the ball had dropped when he came out,” she said. As she was wheeled from the delivery room to her recovery room, hospital staff clapped and cheered and took pictures.

The next morning, a news team interviewed her. She received gifts from the news team and the hospital, including champagne, gift cards, baby clothes, and a tummy time mat. All day long, nurses and other staff dropped by “to meet the New Year’s baby,” Geweye said. “It was an awesome experience.”

Most hospitals find ways to mark New Year’s Eve as a special occasion, according to Dr. Sherry Ross, MD, an OB-GYN and women’s health expert in Santa Monica, CA. “There’s an extra layer of excitement and anticipation on New Year’s Eve, especially as you get closer to the midnight hour,” she told Romper.

People start to get a bit more competitive around 9:00 p.m. 'There is a little more nervous energy.'

Her most remarkable New Year’s Eve delivery occurred more than 20 years ago, during her residency. A mother had a vaginal birth of twins, with one arriving before midnight and the second one after. “So, she actually had a baby born on the 31st and one born on the 1st, in two different years,” Ross said. Though it’s rare, last year there were actually four sets of twins in the United States born before and after midnight.

Ross noted that women may feel some extra pressure during a New Year’s Eve delivery, and she’s observed that people start to get a bit more competitive around 9:00 p.m. “There is a little more nervous energy, but it’s a playful energy,” she added. Many women hope to deliver as close to midnight as possible.

“There’s only so much you can do with labor, and manipulating it. Sometimes you can slow the pushing down if you want to, or speed up the contractions,” Ross said, adding that she hasn’t personally done this with her patients. “But I would suspect that goes on.”

Rather than worrying about whether your baby will be the first of the year, Ross suggested doing whatever you need to do to minimize stress. “Focus on being comfortable, and that helps the baby be comfortable. We ultimately just want a healthy baby.”

Even if you have a December 31 due date, labor is notoriously unpredictable. When Ashley Smith found out her daughter was due New Year’s Eve in 2013, she was excited. “Instantly, I was like, wow, that would be crazy, if we happen to have the first baby of the New Year.” Her husband, on the other hand, joked that they should aim for the 31st in order to get that year’s tax break.

But at her December 31 checkup, her doctor said there was no way the baby was coming that day and recommended inducing labor in a week. “We went into New Year’s Eve thinking, oh, we’re in the clear,” Smith, who lives outside Houston, said. So, naturally, she and her husband went to a party.

If you’re as close to popping as the midnight champagne, and you attend a New Year’s Eve party, Smith warned that you may be the running joke of the night. “Everyone keeps joking that you’re going to go into labor,” she said. “People are just on pins and needles around you, like, ‘Are you going to have this baby at the party?’”

Smith and her husband stayed out past midnight, knowing it might be their last chance to enjoy a late night with friends for a long while. Then, shortly after they got home, her contractions started. By the time they headed to the hospital at 6:30 a.m., she said, “The big excitement of midnight had already passed.”

Even if you’re not in the running for a “first baby,” Smith has advice for anyone with a holiday due date: Plan ahead for good food. Smith, a pediatric dietician and foodie, had imagined that after giving birth, she would reward herself with an incredible meal. What she hadn’t realized was that many restaurants are closed New Year’s Day, especially at night. Instead of a lavish meal, she got stuck with takeout from a local fast-food chain that she described as “one notch above Taco Bell.”

“I wouldn’t eat that by choice any time, let alone have that be my big hurrah meal after delivering a baby,” Smith said. “It was a funny irony.”

Her other advice? Go to a New Year’s Eve party, if you feel like it. Smith was glad she and her husband had one more night out with friends. If you know you might deliver that night, Smith suggested, “Have your backup plan, have a designated driver, and have a plan for getting to the hospital if anything happens at the party. But don’t overly shelter yourself. I think women often go crazy just waiting for the baby to come, but there’s no guarantee it’s going to come on the 31st.”

Potticary is well aware of the uncertainty of childbirth. If her baby hasn’t arrived by Sunday, she says she may go to a New Year’s Eve party. “I’ve still been going out a lot and seeing friends. I don’t like to miss out on things,” she said.

Given the choice, she’d rather not deliver on New Year’s Eve or have the first baby of 2018. “I don’t overly like being the center of attention. I feel like it might be overwhelming if there was a big to-do about it,” she said. “I still haven’t quite internalized the idea of actually having a baby.”

But there’s a silver lining. If her baby does arrive at the stroke of midnight, Potticary added, then at least she would have a good story to tell.