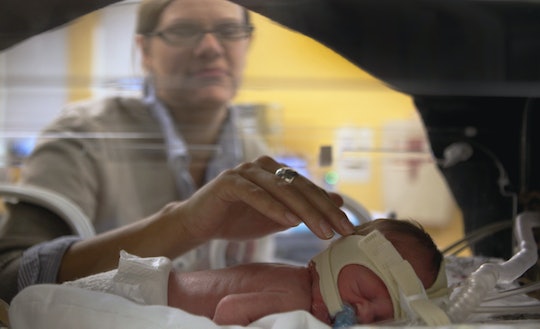 Here's What It's Like To Leave Your Baby In The NICU

My son was rushed into the world ten weeks prematurely via emergency c-section after I suffered a rare and often deadly pregnancy complication known as a placental abruption. The night he was born, I could hear healthy babies crying through the walls of my postpartum room, and being immediately comforted by their mothers. My son was alone in the Neonatal Intensive Care Unit (NICU).

I want to tell you about the NICU, about what it is like to hold a baby the size of a Barbie doll. The first time I left the hospital without my son, he was four days old, dependent on oxygen, and weeks away from being able to eat without a feeding tube. I was sore and swollen from major surgery and traumatized by the circumstances of his birth, but, as the mother of two older children who needed me, life had to continue in spite of my grief and my fear.

November is Prematurity Awareness Month, a month dedicated to advocating for the roughly 15 million babies born worldwide every year, who, like my son, are born before 37 weeks gestation.

I need you to understand that being a NICU mom means having to choose between doing necessary things like caring for older children, buying groceries, and taking a shower... or being with your preemie. And so, I missed diaper changes and his first time drinking from a bottle. I wasn’t always at the hospital in time to ask the doctor directly how he was doing, and every night, for two months, I slept with my phone directly against my ear, waiting for the call that would come to tell me the worst had happened, and that my son was alone, without his mother, when it did. I need you to understand how that rubs your heart raw.

I have never been as vulnerable as I was on the day my son was born.

I want to tell you about my son’s NICU nurses, about how they were the hands that swaddled him and the faces he saw when he woke up at night, and that knowing that they loved my son like I did helped me to survive.

I want to talk about the obstetricians who saved his life. I have never been as vulnerable as I was on the day my son was born, and I had to trust my doctors completely to act in the best interest of my child. I want to tell you that these doctors gave me Christmas mornings and walks down the aisle, and all the love my son will give to the world and all the good he will do is because of them.

I want you to be aware of the research that proves that 41 percent of parents with a child in the NICU showed symptoms of post-traumatic stress disorder, according to research published in ADC Fetal & Neonatal Edition .

For the third year in a row, preterm birth rates continue to rise, per the CDC.

What I want you all to truly know is that America is failing its pregnant women, and that for the third year in a row, preterm birth rates continue to rise, per the CDC.

Finally, I will tell you how important it is that other NICU moms tell their story. Stacey Stewart, the president of March of Dimes, once said that “you become an advocate the moment you tell your story,” and now it is my time to advocate for moms, dads, families, and babies that have felt the pain that I have felt, the fear, the torment and the gut wrenching feeling of not knowing if your child will take another breath.

This November, we must talk about premature birth, about the grief that hardens us and the love that changes us, so that no mother holding her baby in the NICU today will ever have to carry her burden alone.

The March of Dimes Prematurity Campaign Collaborative aims to achieve equity and demonstrated improvements in preterm birth. November is Prematurity Awareness Month and November 17 is World Prematurity Day. To find out more and learn ways you can support research and advocacy efforts, visit March of Dimes.

More Like This
Why Won't My Baby Take A Pacifier? A Pediatrician Explains
Can You Give A Sleeping Baby A Breathing Treatment? Experts Explain
Pinterest Predicts Their Top 2023 Trends In Parenting, Beauty, Fashion, Home, & More
Here’s What To Do If Your Baby’s Nose Bleeds After Suctioning