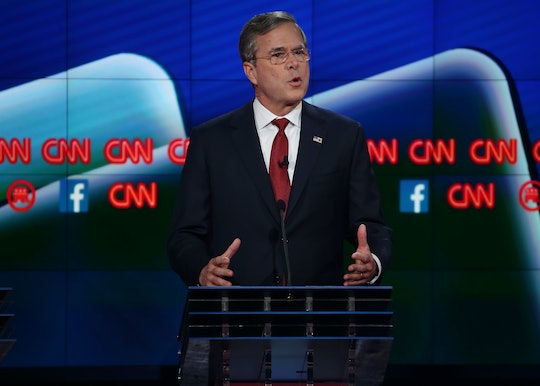 Nine Republican hopefuls gathered in Las Vegas on Dec. 15 for the GOP debate on CNN to remind Americans that hey, they're still vying for the Republican party nomination, and while everyone was quick to count Jeb Bush out, Bush came back with a vengeance. What Bush said about Donald Trump during the debate is a reminder of why Trump will never make it to the presidency — and hopefully, he never makes it beyond the Republican National Convention. While a little back and forth banter quickly fell into an on-screen fight between the two high-profile candidates, Bush reminded Trump:

You can't insult your way to the presidency.

And wow, can I get a round of applause for Jeb Bush?

Prior to Tuesday's debate, I'm sure many of us were slowly watching the clock on Bush's push for the presidency. And, while I don't think Tuesday's performance was enough to resurrect his campaign, Bush's words did wonders for the rest of the GOP playing field — Donald Trump excluded, of course.

What I loved most about seeing Bush come alive was that he stuck it back to Trump in such a way that it would actually hurt the businessman. He didn't go after his policies, his platforms, or his plans, because as we've seen time and time again, Trump is able to skirt past the issues by deflecting with a sacristic, targeted comment. But when Bush countered, it left Trump no other option outside of going on the defensive — and that is, quite honestly, a position we've rarely (if ever) seen Trump in.

It took Bush no more than 10 words to say what we've all been screaming for months: Insults won't earn you the presidency, and you'll have to do much, much more to earn the most coveted seat in the Oval Office than just spew hateful, insulting rhetoric at those who stand in your way. Because when you're dealing with a massive crisis or a nationwide chaos, or a shooting, or the death of Americans, no one is going to stand by while you insult and threaten the very existence of the people who call America home. Bush, though he's not a much better option for the Oval, knows something that Trump does not, and that's when push comes to shove (and push will come to shove over and over and over again), the American people are going to elect a leader they can depend on, and one they can trust. Insulting everyone who stands in your way isn't policy; it's preschool.

Sure, Trump and Bush may know full well that Bush's campaign may see the end of its days soon, but that doesn't mean Bush can't help bring to the forefront the fact that Trump is a terrible, terrible candidate for the presidency. At the end of the day, Trump and Bush are working for the same team: They both want Obama out of office, and a Republican in office. So for Bush to speak out, it's a huge warning sign for Trump and the Republican party.

More Like This
Marie Kondo Gives Up Tidying Post-Kids, Sparking Joy For Moms Everywhere
Does The FDA's Plan To Limit Lead In Baby Food Go Far Enough?
10 Great Podcasts That Will Keep Your Kids Entertained On Your Next Family Road Trip
Sally Field Is The Ultimate Cool Mom Who Once Tried To Set Her Son Up With An Olympian
What Parents Are Talking About — Delivered Straight To Your Inbox