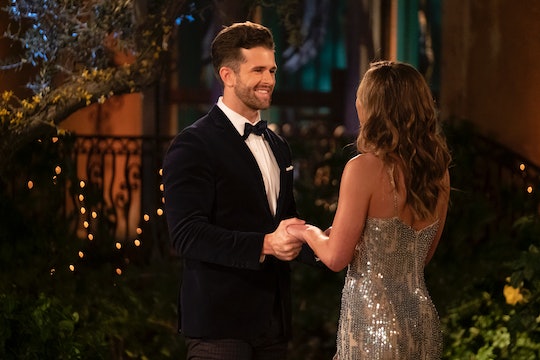 The fact that Hannah signed off on night one of her two-part finale with a grim message delivered directly to the viewers was not a great sign of what was to come. Everyone was on edge waiting to hear what Jed had to say about his girlfriend on The Bachelorette, but Hannah promised "rumors" would be addressed and that she'd be seeking answers. Then, on night two of the finale, Chris Harrison picked up with assurances that the proposal would be "cringeworthy" in light of what's happened since. And when the whole proposal went down in under 40 minutes on the finale, fans knew it was about to go down during "After the Finale Rose."

Hannah confessed that two days after getting engaged, Jed told her he had broken it off with someone a week before coming on the show. But when Haley Stevens' People interview came out, it was a very different story than the one Hannah had been told. Jed and Hannah met back up in Los Angeles after she read the interview and she was clearly furious.

Jed insisted that there were "two different views of what happened," and tried to explain that he and Haley felt differently about the nature of their romance. Jed claimed that he and Haley were "hanging out" but he didn't think of their connection as "a relationship." He admitted to sleeping with Stevens, going on a cabin trip with her, and introducing her to his parents. He even went on to explain that Stevens threw him a surprise birthday party, for which her parents gifted the couple a trip to the Bahamas. Three days before they were supposed to leave for that trip, Jed was invited to do The Bachelorette. Finally, he admitted to Hannah that he told Stevens he loved her again before leaving and reassured her that he was only going on the show to promote his career (which, to his credit, he had already told Hannah about).

Hannah was understandably upset that Jed spent the night before coming to the mansion having sex with Stevens, calling and texting her to say I love you. Jed claimed that he knew saying I love you was a mistake, and that he didn't really "feel it." He also said he had broken it off "in his heart" when he met Hannah, but admitted that he never really broke things off "verbally."

At that point, Hannah needed a break. Unfortunately, once she rallied to return to the conversation, the first thing Jed reiterated was that Stevens wasn't his "girlfriend." Not the move, dude.

Hannah quickly realized why Jed's family was so cold to her and it was obvious once she started putting the pieces together that Jed probably couldn't talk his way out of this. He promised Hannah he'd do whatever she needed to regain her trust. But that wasn't exactly an alluring offer to her.

"I just feel like this experience was taken away from me because I didn't know all the details," she said.

Jed admitted that he behaved selfishly so that Hannah wouldn't leave him. But in the end, she returned his ring. "This does not mean the same thing," she said as she took it off. "That's not what I said yes to."

It was an emotional post-proposal conversation, to say the very least, and poor Hannah very clearly got screwed out of the dream Bachelorette experience. It remains to be seen what she does with the pieces.