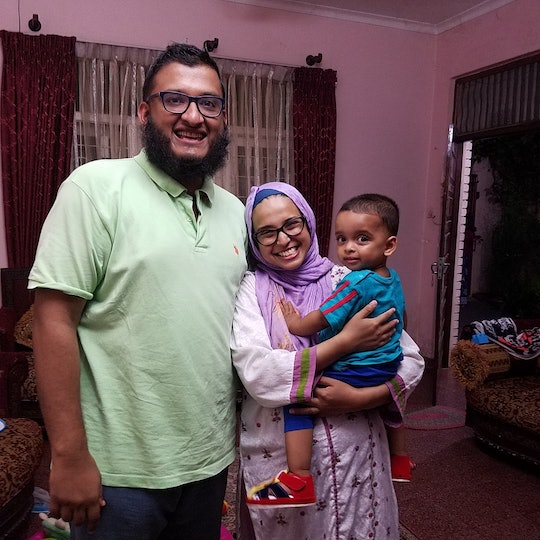 Speaking at the Democratic National Convention just days ago, Khizr Khan, the father of deceased vet and Muslim American Captain Humayun Khan, didn’t mince words when it came to the Republican candidate, Donald Trump. Addressing not only the people in the room, but the nation, Khizr Khan told Donald Trump: “You have sacrificed nothing and no one." Watching him tremble with fury, I couldn't help but think of my own American-born son — born to Muslim parents with a Muslim name — and I found myself animated with the same fury. I think back to my parents, who immigrated to the United Arab Emirates before I was born in search of safety from persecution, and the fear and the fury that must have had held them in its grip.

And because of that fear, I have never known what it’s like to belong somewhere.

I was born in Dubai, another city of dreams. And more than a few nightmares. It is a city of dust, blood, sweat, tears, my own family’s mingled with millions of other hopeful immigrants. Though I lived in Dubai 25 years of my life and my father has been there 35 years, there is no hope of us getting citizenship. Were it not for the fact that my older brother and dad have business visas and not work visas, they would be forced to retire at 60 (my dad is already 64) and go back to Sri Lanka, our “home” country.

All for the want of a silly piece of paper. An Emirati passport.

My father and mother are Sri Lankans. They fled anti-Muslim persecution and an increasingly bloody civil war between the majority Sinhalese and minority Tamil communities. My mother once told me a chilling story from the time they lived in Jaffna (northern Sri Lanka where the conflict started). A mob had gathered at my family’s doorstep while our Tamil neighbors hid in the kitchen. My father, blessed with the gift of the gab, somehow talked down these bloodthirsty hooligans and saved those people’s lives.

As far away as I am from America, I cannot go far enough to not feel the effects of Trump as president. This is a fact everyone in the world has no choice but to live with.

Our neighbor was so grateful he offered my father his house. “No need,” my Dad said. “You’ll come home one day.” Only, they never did.

My father is a born hustler, so eventually, tired of the wage slave’s life in Dubai, he started his own business. My mother was a born teacher. She loved little kids. But because she was terrified that we wouldn’t have enough money to afford overseas college tuition fees (often three times the amount that residents or citizens pay), she quit her job and worked with my dad as our business’ general manager. All so that we could get something my parents didn’t have a prayer of getting in Sri Lanka: A college degree.

Another silly piece of paper.

I got a college degree alright. And what a degree it was. I wanted to study filmmaking but fear kept me from doing something so “artsy.” Instead, I studied Media and Communications at the University of Melbourne. I thought journalism was a good compromise to make between my creative ambitions and my parents’ desperation to secure my future. But something happened that I did not anticipate. In those humanities classes, I began to give free reign to my weird and wild imagination. To imagine different worlds. Worlds without borders, both physical and emotional. Not for the first time, but for the first time academically, I thought about the impact of the stories we’re told in movies, the news, and by other cultural products. Not for the first time, I saw that there was no place for me in the Western media landscape, but because I knew no other language beyond English, I had no choice but to make room for myself.

I almost sacrificed my relationship with my parents because I wanted a kinder future for my children. Khizr and Ghazala Khan sacrificed one of their three sons, Capt. Humayun Khan, in the name of American freedom. What has Donald Trump sacrificed for his great country? For his great freedoms? What has he lost?

That college degree gave me the privilege of nurturing big dreams. Dreams that clashed with my parents’ vision of what they wanted for me. My parents had raised us to live in fear. And how could I blame them? They grew up in a world where brave people were murdered in cold blood. But college taught me that I wanted to live the rest of my life telling our stories. I wanted to see someone like me on screen. I wanted to live in faith and hope. And I nearly alienated my parents because of that.

In his incredible speech at the DNC on Thursday evening, Khan said, “You have sacrificed nothing and no one.” Yet in an interview with ABC News' George Stephanopoulos in the days after Khan's speech, Donald Trump talked about the many "sacrifices" he feels he has, in fact, made. He said,

I almost sacrificed my relationship with my parents because I wanted a kinder future for my children. Khizr and Ghazala Khan sacrificed one of their three sons, Capt. Humayun Khan, in the name of American freedom. What has Donald Trump sacrificed for his great country? For his great freedoms? What has he lost?

I thought that maybe, just maybe, America, the most powerful country in the world, one of the few countries with nuclear weapons, would protect my son.

Eventually, I got married and as luck would have it, my husband’s assignment took us to America. In beautiful Colorado, my dreams soared. Colorado is known for its politeness, but I was truly awed by just how welcoming everyone was, Muslim and non-Muslim. Here was a place I could have a family. Here was a place, quiet and peaceful, that was loaded with potential.

So we had a son. Our pride and joy. And because of where he was born, he was an American passport holder.

I was thrilled to give birth on American soil. For once, I thought that maybe, just maybe, America, the most powerful country in the world, one of the few countries with nuclear weapons, would protect my son. Maybe because Americans have the privilege of traveling to many places without visas, the world would really be his oyster, a dream I’d always had for my kids. And maybe, just maybe, by association, we, his parents, would finally be safe too. Maybe we would have somewhere we finally belonged.

But fate was about to deal us a big blow.

Though my husband and I had our visas renewed State-side, we had not yet had our visas stamped in our passports. So we decided to go to Sri Lanka on holiday and visit the American Embassy there in order to do so. We thought it would be a simple in-and-out procedure. To our dismay, the Embassy told us our visas would needed “additional processing” — whatever that meant.

Donald Trump, if elected president in November, wouldn’t let my family back into the country because my son has an “Ahamed” in his name and I have a scarf on my head.

I cannot tell you how grieved and helpless I felt as we sold our belongings and broke the lease on our breathtaking mountain-view apartment. I can’t tell you how frustrated I felt — then, and even now — that the extraordinary screenwriting and filmmaking opportunities available to American residents are now no longer open to me. I can’t tell how tragic it was for me to say goodbye to Colorado.

But like far too many times in our lives, we had no choice.

There is much more at stake than my family returning to the U.S.

Like Khan said, Donald Trump has sacrificed nothing and no one one, yet in a statement given to the press, Trump said,

Mr. Khan who has never met me, has no right to stand in front of millions of people and claim I have never read the Constitution, (which is false) and say many other inaccurate things.

Yet it is fine for Trump, if president, to want to keep my family out. To believe many other inaccurate things about who we are, what we believe, and what we want.

The truth is, there is much more at stake than my family returning to the U.S. The President of America is the most powerful man in the world. His decisions on foreign and economic policy can shatter entire countries and regions. As far away as I am from America, I cannot go far enough to not feel the effects of Trump as president. This is a fact everyone in the world has no choice but to live with.

Why should our lives be less secure simply because of where we were born? And yet it would seem America, the land of the free and the home of the brave, is no home to us either.

I’m here now in Sri Lanka, the only place where I can legally spend the rest of my life. Because I grew up in Dubai, I can’t speak the language. In a strongly nationalist country, this means that I’ve sold out my heritage. I don’t know the way things work here. I move differently and think differently. People often mistake me for a foreigner and in this country, that sometimes means exploitation.

I am again reminded of Khan’s words: “You have sacrificed nothing and no one.” But for my mother and father, they sacrificed their ties to Sri Lanka, their extended families, their language, and their culture when they immigrated to the Emirates. They risked raising strangers to their culture and language and lo and behold, they did. My mother sacrificed herself for some silly pieces of paper — college degrees, visas, passports — so my older brothers and I might know what it’s like to be not be afraid anymore. It all seems so arbitrary now. Why should our lives be less secure simply because of where we were born? And yet it would seem America, the land of the free and the home of the brave, is no home to us either.

The words written on the Statue of Liberty never fail to take my breath away.

Give me your tired, your poor,

The wretched refuse of your teeming shore.

Send these, the homeless, tempest-tossed, to me:

I lift my lamp beside the golden door.

I think of my tired and poor parents, the huddled masses shuffling out of Syria, Sudan, and elsewhere. The shores that teem with the bodies of dead children. And I realize that this election season, America has to decide what it stands for. The discourse in this year’s election is soaked in fear. Like Khizr Khan, a man one generation before me, but with dreams I recognize as similar my own, I urge Americans to take this election seriously. You’re not just choosing a president. You’re choosing whether you want your children to live in fear or hope. Some of us don’t have a choice. But you do.