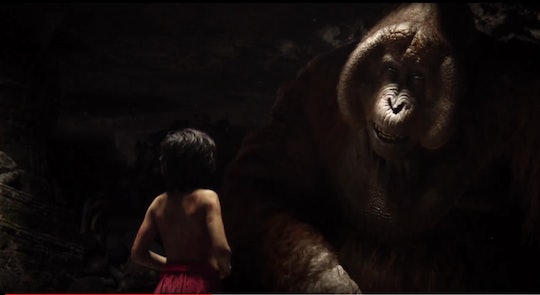 What Kind Of Ape Is King Louie? 'The Jungle Book' Ape Is Large & In Charge

When fans of the animated, 1967 version of The Jungle Book saw the most recent live action version, they were shocked at what happened to their beloved King Louie. The film, in theaters everywhere, is stunning with its clarity and CGI animals that look life-like, but something was missing. Gone was the personality-filled orangutang and a much larger ape was in its place. He may still have the same large personality, but what kind of ape is King Louie?

The ape's appearance now matches his large personality in the film. He is, after all, the king of the jungle. In the modern, updated CGI re-telling of the 1960's and Rudyard Kipling classic, King Louie, who is played by Christopher Walken, is a Gigantopithecus — yes, that is a very real word and very real type of primate.

According to How Stuff Works, the now-extinct primate once inhabited prehistoric India and is now extinct; you won't be finding any kind of ape the size of King Louie in your average jungle.

It was estimated that a Gigantopithecus was to be more than 10 feet tall and weigh more than 1,200 pounds — now try that on for size. Scientists were able to determine this through discovering teeth and bones belonging to the ape in China, Vietnam and India.

According to Mental Floss, the Gigantopithecus lived in the jungles of India 6.5 million years ago, a lot more prehistoric than a lot of the species featured in the film. However, it was a strategic change to make King Louie such a large species.

King Louie, in previous versions of the story, including the animated version, has always been an orangutang. However, in trying to stay as close to The Jungle Book's setting of an Indian jungle, filmmakers decided to stay true to the location and use a type of ape found in the jungles of India — thus, the Gigantopithecus.

"We had this notion that we would be as authentic as we could to the region," said The Jungle Book producer, Bingham Taylor, about Louie's new look.

However, with an animal that only lived so long ago, there was only so much that animators could base their character off of. Using scientific information found online, visual effects artists for the film imagined how the animal would look and move, according to Science News. In turn, they made King Louie, the ape that stands at 12-feet-tall and resembles a very, very large orangutan — his closest living relative.

The result of the animators is truly amazing and life-like. While watching the film, you are blown away by the sheer size of the primate and wonder if something of its size ever existed on this earth. Well, it definitely did and it is beautifully captured in The Jungle Book, doing justice to the original story and animated classic.