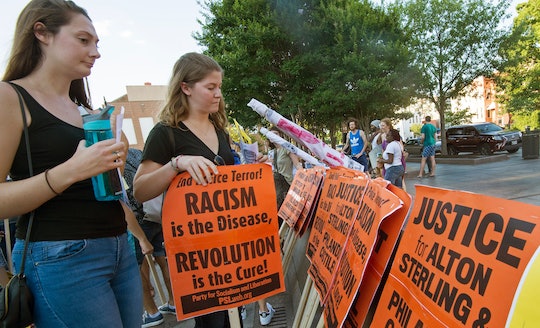 Today, as Donald Trump celebrates his upcoming inauguration with the "Make America Great Again! Welcome Celebration," current President Barack Obama says goodbye to the White House, and his time as our commander in chief. Tomorrow, Donald Trump will officially be sworn in as the 45th president of the United States of America. And Saturday? 200,000 people are expected to march on Washington, to remind Mr. Trump that all voices matter. And while the Women's March on Washington is slated to be a beautiful, historic moment for people all around the world, all attendees should be as prepared as possible for what the event entails, and have a firm grasp on the rules so the march can move as smoothly as possible. While many questions have been asked and answered, one that might not have crossed your mind in the midst of all the hype, is this: What kind of backpack can you bring to the Women's March on Washington?

According to the Women's March on Washington's website, there are specific guidelines for the types and sizes of backpacks, and purses, that will be allowed into the march's perimeter, so be sure to make note. The reasoning behind any bag restrictions is usually related to safety, and as such, it's important for participants to take the guidelines seriously.

So, you can definitely bring backpacks to the march, but only if they're clear and not too large. The reasons for this aren't stated, although it can be easily assumed that the need for clear, smaller backpacks stems from safety concerns, and the need to ensure no one is bringing any weapons to the event.

However, if you're worried that you won't have enough room in your smaller bags for snacks, phone chargers, and more, there are resources available to help you out. As The Washingtonian reported, many local businesses around DC are opening their doors to marchers, and providing necessary resources like charging stations, bathrooms, hot chocolate, and more to help make sure that every marcher feels welcome and taken care of.