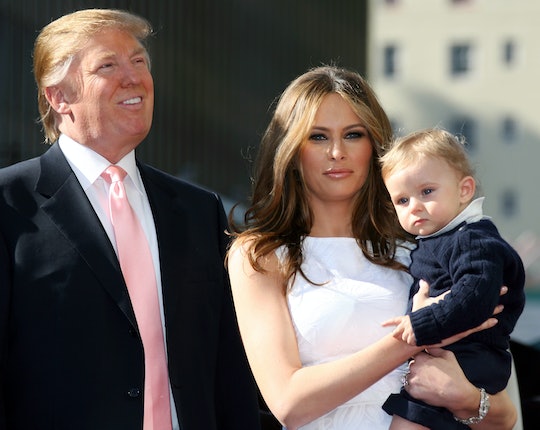 What Kind Of Dad Is Donald Trump? His Sexist Views On Parenting Hurt American Mothers

Much like most things in Trump-world, when it comes to parenting, everything appears to be all about The Donald. He's given several candid interviews over the years that paint the picture of a guy who doesn't care much for domestic stuff or taking a particularly active role in child rearing. But, despite his position on pitching in, his older kids, Ivanka, Erica, and Donald Jr., have been visible surrogates for their dad on the campaign trail. So what kind of dad is Donald Trump? To say he's "traditional" would be a generous way to put it. And his past sexist statements on parenthood make American moms' jobs even tougher.

Altogether, Trump has five kids: Ivanka, Eric, Donald Jr., Tiffany, and Barron. And in interviews he's given, Trump has never been shy when talking about being a hands-off dad.

“There’s a lot of women out there that demand that the husband act like the wife, and you know, there’s a lot of husbands that listen to that,” Trump said in a 2005 interview on the radio show Opie and Anthony, BuzzFeed reported. “So you know, they go for it.”

At the time, Trump's third and current wife, and would-be future First Lady, Melania, was pregnant with Barron, the youngest of the Trump brood.

Those parenting un-pleasantries, include walking with a baby in a stroller in public. Trump told Howard Stern in 2005 that Marla Maples suggested he do it with their daughter Tiffany, according to BuzzFeed. His response? "Right, I'm gonna be walking down Fifth Avenue with a baby in a carriage," he said on Howard Stern. "It just didn't work."

Why not? I guess it would mess with his sex appeal. He went on to explain how the baby raising works in the Trump family. "She takes care of the baby and I pay all of the costs," he said. If nothing else, Trump is clear about his expectations.

But, to be fair, Melania and the rest of Trump's family have nothing but the highest praise for the candidate, and they all even went on CNN to give an interview to talk about what a great guy he is. So, if it works for them, then they should be able to assume whatever family roles they choose.

Here's a clip reel of the family at the CNN Town Hall in April.

But what's the message Trump is sending to the men — and fathers — that admire and support him? This is a father who told Howard Stern in 2007 that being involved in raising kids has never been this "thing."

If you're a 70-year-old billionaire, I suppose that arrangement could be viable, as long as you're willing to dismiss a dad publicly admitting to neglecting his kids because he's just not that into it. But there are millions of American mothers out there who need help from their partners — regardless of whether they think it's fun or not.

The reality is that 40 percent of American households with kids under 18 have a mom as the primary, or sole, breadwinner, according to Pew Research, More than one-third of those women, 37 percent, are married mothers who out-earn their male partners (go girls) and 63 percent are single mothers. These are women who work full time, for 79 cents (or less) on the dollar for what a man makes for the same work, in the only developed country without guaranteed paid leave.

So, if Trump actually wants to be a national leader — or maybe even win over even a couple of additional women voters — it might be time to get with it and help a tired mom out. Even if he refuses to advocate any policy changes — like helping moms access affordable child care — at the very least, he could encourage more dads to pitch in at home instead of painting it as hopelessly uncool women's work. Or maybe he's fine with moms just deciding voting for him isn't their "thing."